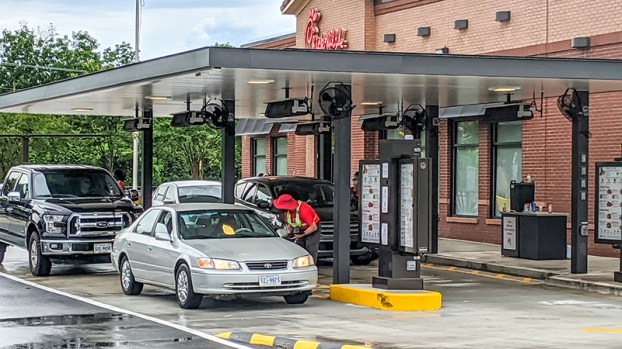 The Chick-fil-A in the Harbour View area of North Suffolk reopened Thursday after being closed for two months for renovations to expand its drive-thru, kitchen and parking lot.

Expect the drive-through service to moo-ve faster now that the Chick-fil-A in the Harbour View area of North Suffolk reopened Thursday with dual lanes and other upgrades to help expand its capacity.

The only announcement that the Chick-fil-A made prior to its opening Thursday came about two hours before it would take its first customer. And since 10:30 a.m., when it reopened for business, the two drive-through lanes have rarely had a lull.

The fast food restaurant had been closed for about two months to upgrade its restaurant and expand its capacity. The timing of that closure, during the coronavirus pandemic, was coincidental. The plan had always been to close during this period, as the upgrades have been about two years in the making, according to restaurant owner Dan Curran.

The restaurant at 6212 College Drive, closed April 2 in order to expand the parking lot, add a permanent, covered double drive-through and upgrade the kitchen with state-of-the-art equipment to improve efficiency.

“We increased the capacity of our drive-through significantly, putting in a double drive-through,” Curran said. “We re-did the kitchen completely, and really went with a significant upgrade in there that allows for much, much higher volume, much higher productivity, and so we can actually do more business. It’s going to feel less busy.”

Along the way, it faced challenges with power and gas companies the store needed to do work as part of the upgrades that down to skeleton crews. Still, Curran said the work went smoothly even with the challenges posed during the pandemic.

The store had been able to serve about 145 customers per hour, which it expects will rise to more than 200 cars per hour in the double drive-through as its expansion is now complete.

It reopened its drive-through, as its dining room is still closed because of the pandemic, and it expanded parking behind the store while adding more pick-up spots for people who ordered ahead.

“The idea was to reduce congestion,” Curran said. “We built the parking lot in the back. We doubled our parking by building 42 parking spots. That’ll just make it so much more convenient to get around the drive-through, get around the building, just all in an effort to increase speed of service. People are in a hurry. I think we should be too.”

Anticipating that it would be busier after it reopened following the upgrades, Curran hired an additional 36 people to the 110 it already had.

While it was closed, many of his employees worked at other Chick-fil-As in the region, and he kept some of the store’s leadership team on the payroll. He said the closure also allowed the store to double-down on its safety protocols.

“We’ve gone above and beyond all that,” Curran said. “The government has recommendations, but Chick-fil-A’s are stricter.”

Employees wash hands every 30 minutes, and the restaurant includes a hand-sanitizing station outside for drive-through workers. Everyone wears masks and gloves, Curran said, and the store takes everyone’s temperature at a designated station to ensure no one is exhibiting any COVID-19 symptoms.

But Curran is happy to be open again, and is preparing for when the restaurant can allow customers inside. He said once it is allowed to open up its indoor dining area, it’ll be full-service and give people whatever option they are comfortable with to get Chick-fil-A food – dine-in, carryout or delivery. He has enjoyed seeing the regulars return.

“It’s like family,” Curran said. “We’re back together as a family, and it’s just good to be back.”

Suffolk City Council will hold a meeting at City Hall Wednesday, the first time it has done so since March... read more