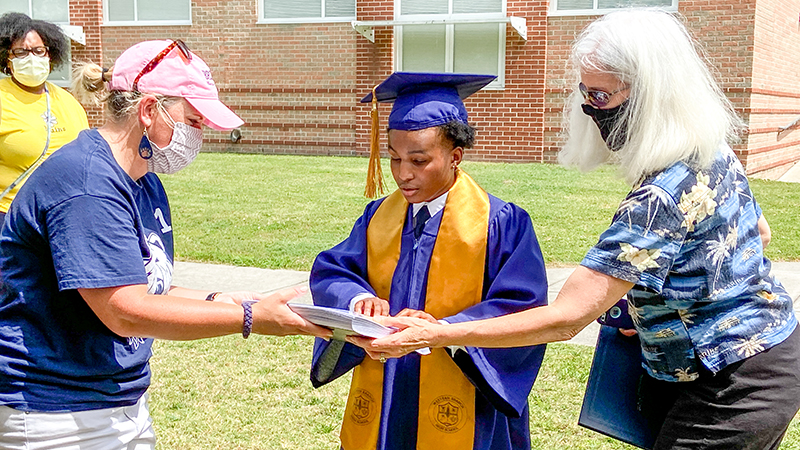 In September, Walker approached the school’s yearbook advisor, Laura Emerson, about getting a Braille yearbook for his senior year. After looking into it, Emerson found out that very few schools have pursued it, and Braille yearbooks could cost more than $10,000.

“I started putting my mind on that we are going to have to raise the money for this,” said Emerson. “Then I got in contact with Desmond’s (teacher of the visually impaired) and the Braille company he worked with and got a good, reasonable quote we felt like we could fundraise.”

The cost of the yearbook was $1,250. To Emerson’s surprise, the funds were raised in a single day once her GoFundMe was posted. Once the yearbook company decided to donate the yearbook, Emerson gifted all $1,425 the fundraiser had brought in to Walker as a scholarship.

“It’s also exciting because the (other) yearbooks haven’t come in yet,” said Emerson. “This is the first yearbook to go out.”

For a personal touch in the yearbook, a QR code in the back will take Walker to an audio recording of his classmates reading and describing the pictures to him.

“I was shocked and impressed,” said Walker. “Everyone is always excited to read their yearbook, and now I have a yearbook I can read on my own.”

Walker plans to attend Tidewater Community College before transferring to a university. He wants to study to be a teacher of the visually impaired and help other blind children learn.

“I want other students who are visually impaired to never give up, keep trying, pass all their classes, and to be an inspiration to others,” said Walker.

Walker has been an inspiration to many himself. He won the Bruin Inspiration Award, one of only a few Bruin Medals given to outstanding seniors.

“He always kept a wonderful attitude despite everything,” said Kimberly Coleman, Walker’s teacher of the visually impaired through grade school and middle school. “He has such a positive and beautiful spirit. We can learn a lot from him.”

Victoria Miranda, Walker’s high school teacher of the visually impaired, stated that even though he has many challenges facing him in college, he will “shine going forward.”

“He’s such an amazing kid,” added Miranda. “He has impacted my life.”