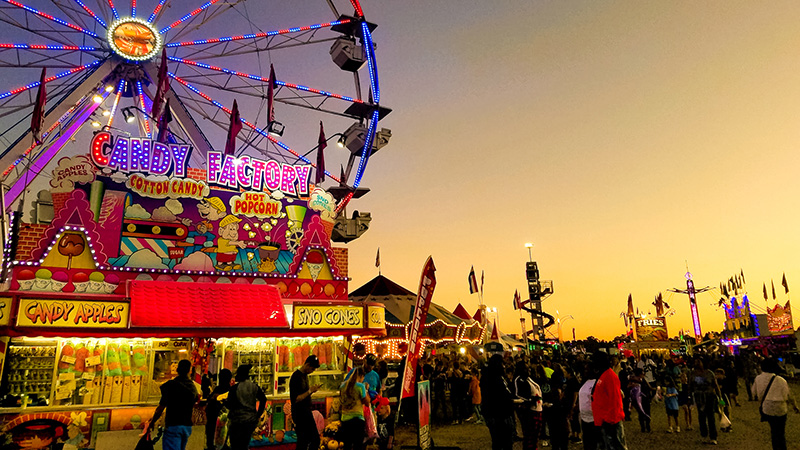 A view of the midway from Peanut Fest 2019. This year's festival has been canceled. (Submitted Photo)

There will be no carnival rides, no Peanut Butter Sculpture Contest, no concerts and no demolition derby gracing autumn in Suffolk this year.

“It is with great disappointment and careful consideration that the Suffolk Festivals Inc. Board of Directors announce the cancellation of the 2020 Suffolk Peanut Fest,” according to a press release from the Suffolk Peanut Festival. “After much discussion, the Board and staff ultimately decided that cancelling the festival is in the best interest of our community, given the impact of the COVID-19 pandemic.”

Theresa Earles, the 2020-21 festival chair and publicity coordinator, said the decision was an extremely difficult one. Though there have been cancellations of one or two days in past years due to inclement weather, it’s the first time she knows of the entire festival has been canceled.

“Ultimately, a lot of factors go into deciding whether to cancel now or later,” she said. “We don’t know what phase we’ll be in by the time October rolls around.”

Gov. Ralph Northam announced Tuesday that Virginia would move into Phase 3 of the reopening plan on July 1. Under that phase, outdoor recreation venues are allowed to be open at 50-percent capacity with a maximum of 1,000 people. It’s unclear what future phases will look like, though, and the governor said Tuesday there is a possibility Virginia will have to move backwards in the phases if COVID-19 indicators spike.

Earles said nationwide tourism industry research shows that autumn events will pull in about a quarter of their normal attendance, far lower than economically feasible for most large events. The Suffolk Peanut Fest usually brings in about 50,000 to 60,000 people over the four-day period.

In the end, the health and safety of the attendees, sponsors, volunteers, vendors, merchants, entertainers, staff and others is paramount, Earles said.

“There’s no way to socially distance or to sanitize everything in that kind of atmosphere to keep everyone healthy,” she said. “We’d much rather have an event where people feel safe and they want to come and they want to bring their families.”

The organization hopes to put on its greatest event ever in 2021, she said.

“It gives us more time to plan and prepare and hopefully bring back Peanut Fest bigger and better,” she said.

“It’s just not an easy decision, and I hope people understand and bear with us.”