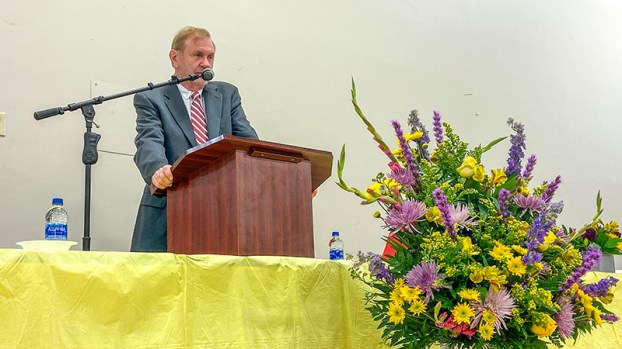 Guest speaker Jack Barsky, former KGB spy in America, gave his testimony on finding God in America and his time as a spy.

The Suffolk Leadership Prayer Breakfast met in person on Thursday with a former KGB spy as the guest speaker.

A group gathered for breakfast and prayer at The Liberty Center off Godwin Boulevard. This event usually is on the National Day of Prayer in May, but due to COVID-19, it was held virtually with the in-person event postponed.

With over 250 in attendance, many COVID-19 regulations were in place. Temperatures were checked as guests came through the door. To replace the usual buffet breakfast, breakfast items were prepared in separate to-go containers. Tables were spaced out with handwipes provided at each setting. At dismissal, each section of the gymnasium was dismissed to different exits to maintain proper distancing.

One of the guest speakers was Jack Barsky, a former KGB spy sent to America to gain intel on foreign policies. In an unforeseen turn of events, he found himself staying in America and finding God.

Barsky was born and grew up in poverty in East Germany. In 1969, Barsky had graduated from college as valedictorian of his class when the KGB approached him. After being trained for five years, he was sent to America. He came under the name Jack Barsky, taken from a gravestone from a young boy in Maryland. His mission was to make connections and find intel on and influence American foreign policies.

In 1988, Barsky received a message that he may be compromised and needed to go back to Germany.

“What kept me from going back was something stronger than I had ever faced before,” said Barsky. “It was unconditional love.”

By that time, Barsky had become a father and had an 18-month-old daughter. Barsky told the KGB that he could not come back because he had contracted HIV. He knew that the KGB would not want this disease to infiltrate Germany. To his surprise, they bought the lie.

During his years in America, Barsky’s views on religion had shifted. In Germany, Marxism and Scientific Marxism were the common beliefs.

“We were taught that religion was opiate for people, and Christianity was how capitalists controlled the masses,” said Barsky.

Once he lived in America and saw religion and Christianity firsthand, his atheism slowly morphed into agnosticism. After he hired a new administrative assistant, she showed him the love and truth of Jesus — and later became his wife.

Barsky has told his story on “60 Minutes” and wrote a book called “Deep Undercover: The Story Nobody Expected to Hear.” He became a U.S. citizen in 2014.

Stuart McAllister was another guest speaker. He told his story of leaving home and being a bouncer at a dance hall in Scotland. Once becoming a Christian, he decided to be a missionary and has faced many imprisonments for smuggling Bibles into various communist countries.

McAllister is currently working with Ravi Zacharias Ministries, where he met and befriended Barsky.

Prayer during the gathering included one for families lead by Cmdr. Arnetta Taylor, who is retired from the U.S. Navy. She prayed for a community that is safe and healthy for children to grow up.

Another prayer was led for the nation and its leaders by Chief Petty Officer Ronald Taylor, who is also retired from the Navy. He prayed that the leaders and their families would be blessed and seek God’s face.

“Unite us under a blood-stained banner that we may have peace and live under Your will,” he prayed.

Neena Moojani, a native of Hong Kong, led a closing prayer that encompassed the breakfast theme.

The virtual event from National Day of Prayer on May 7 can be viewed at https://tinyurl.com/2020prayer.

Student-athletes across Virginia were awaiting news Thursday on how their fall sports season might be impacted by the COVID-19 pandemic.... read more