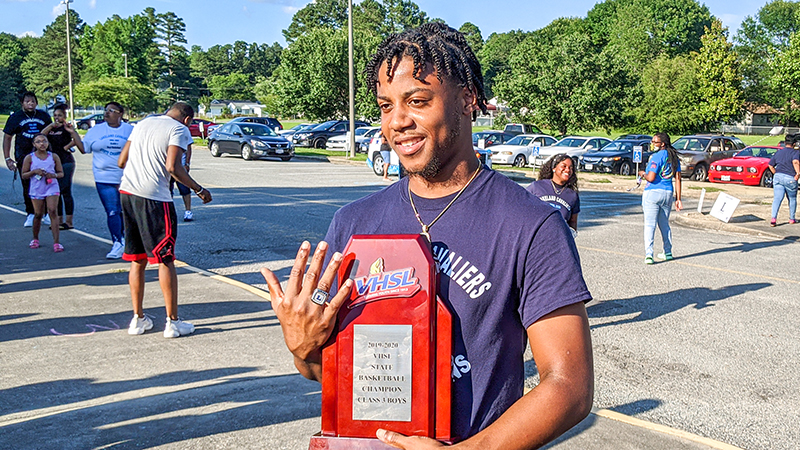 Julian Smallwood and the rest of the Lakeland High School boys basketball team received rings and celebrated their share of the Class 3 state championship during an event held outside the school Monday. Lakeland and Cave Spring were declared co-state champions after the Virginia High School League canceled their championship game in the wake of the coronavirus pandemic.

There was bling in the rings as the stars of the Lakeland High School boys’ basketball team celebrated their state championship in a brief ceremony in front of the school Monday.

The Cavaliers, who had two players this season — Keimari Artis and Clint Wright Jr. — surpass the 1,000-point mark for their high school careers, were prepared to take on Cave Spring March 13 before the Virginia High School League canceled the game. Having won seven straight games heading into that matchup, Lakeland, which finished the season at 18-8, was peaking at the right time.

Wright Jr., who committed in May to play basketball at Division II Georgian Court University in New Jersey, said that was an emotional roller coaster for him and the team.

“We were happy for where we were at, of course, but we really wanted that game ‘cause we just wanted to have that memory,” Wright Jr. said. “It was going to be a prime time game, 8 o’clock, probably all of Suffolk was going to be there. It was going to be a fun and exciting game. Unfortunately, we couldn’t have it, but we’re glad that we are here and we got to where we got.”

Julian Smallwood, a senior transfer from Booker T. Washington High School in Norfolk, said not getting to play for the state championship hurt a lot.

“We won’t ever get this moment back, but it’s good to cherish it now,” Smallwood said.

Wright Jr.  believes the Cavaliers would have won the title outright.

Still, getting one more time together as a team and getting rings to celebrate a state title, even a shared one, was special.

“It’s just a blessing, just having everybody coming out here to support us,” Wright Jr. said. “Of course, we didn’t have the state (championship) game, but we accomplished a goal, we worked hard in practice, the summer workouts, everything, it just all came together and we got all this.”

Said Smallwood: “It’s just a good vibe, everybody coming together in remembrance of the team and hard-fought games.”

The team had good chemistry on and off the court that helped in key moments over the course of the season.

“On the court I’d say we were very trustworthy,” Smallwood said. “We believed in one another. We were never afraid to make the extra pass or help out. We really trusted each other on the court, and that just made us a whole lot better.”

“We were clowns on the court. It was probably the funniest team I ever played with.”

The celebration is something Smallwood won’t soon forget.

“It meant so much, especially since I’m a senior,” Smallwood said. “And I know I’m not going to get a moment like this again. It was just like, the team being together again, it just brought back memories. It was just good to see everybody. It’s good to be together.”

Wright Jr. said most of the team had been together since the fifth and sixth grade, and had set a state championship as a goal.

“We’ve just been working hard together,” Wright Jr. said. “We know ever since we were little, we were like, we’re going to win this ring. Tenth grade was, of course, a rough year for us. Eleventh grade year, it was tough. But 12th grade, we knew we were going to get it.”

But not without some challenges along the way.

“We’ve been through some hard times,” Wright Jr. said. “We went through some trials, some times when it was like, ‘I don’t think it’s going to work,’ but we just stayed together. We were just like, ‘You know what? We’re going to make this happen.’”