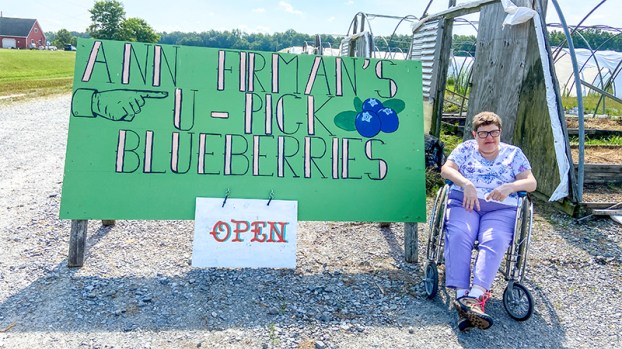 Ann Firman is ready to welcome the public to her family’s farm to pick fresh blueberries.

It’s blueberry season, and local blueberry farms are offering fields that guests can pick from themselves.

It’s the first year allowing folks to pick their own blueberries at Ann Firman’s U-Pick Blueberries, which offers organic, local produce for guests to pick themselves.

“We opened our stand about 10 days ago,” said Norman March, owner of the farm. “Last weekend, we had cars lined up to the road to get in and pick. We are one of the only U-picks for blueberries in the area.”

The blueberries are grown organically. No chemicals are sprayed on them, and no fertilizer is used. Only an organic mulch is used to keep the blueberries at the proper pH level and naturally fertilize the bushes.

“It is country out here,” said March. “You might see a tick or a red bug while picking, but that’s just what we live with every day here.”

The blueberries start to get ripe in the middle of June and last through the end of July. Ann Firman’s still has a few weeks before the blueberries are gone.

“We grow everything we sell,” said March. “This lets us sell our flowers at our Ann Horton’s location for less than half of what big businesses do.”

At their stand at Ann Firman’s, guests can buy pre-picked blueberries, fresh eggs and other items in season.

“We will hopefully have honey next week,” said Leann Gardener, who runs Ann Horton’s and is the head grower at Ann Firman’s. “Of course, that is assuming all goes well with the weather and bees.”

The 113-acre lot has been in March’s family for generations. His ancestors earned the land grant after working seven years as indentured servants in 1722. The farm used to grow tobacco before switching to flowers. There are plans to expand the blueberry fields and possibly add strawberries for picking, too. March commented that these plans are “still up in the air.”

Ann Firman’s U-Pick Blueberries plans to be open from 7 a.m. to 1 p.m. until all the blueberries are picked. The cost is $1 per person plus $15 for each two-and-a-half-gallon bucket. For more information and open days, visit Ann Horton’s Facebook page or contact Leann Gardner at 252-207-5195.

Growth, coupled with the growing need for hospital services in North Suffolk, are the drivers behind plans by Bon Secours... read more