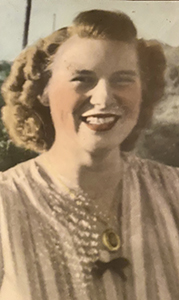 Irene Both Tatum, 97, of Suffolk, passed away on July 30, 2020. She moved to Suffolk in 1963 and lived the next 50 years overlooking her beloved Nansemond River.

She was born in Kassel, Germany, to Erna and Alfred Both on March 26, 1923. After World War II, she met and married Aubrey S. Tatum, an American soldier. They married in 1946 and returned to America, where she became a proud citizen. In Germany, Irene was an elementary school teacher and after the war, an interpreter for the U.S. Army.

She spent countless hours creating beautiful handwork. She was also an avid reader and an accomplished gardener. Her greatest passion was the protection of the environment and all of its inhabitants.

Our family would like to extend our gratitude to the many caregivers that became a part of her life in the past several years from Home Instead, especially Gwen Copeland and Betty Mazie, who became dear friends. A very special thank you to the family of Harmony at Harbour View for their loving care over the past seven years. Thank you Debra, Julie, Teresa, Beverly, Amanda and the list goes on. We will never forget you.

Parr Funeral Home & Crematory is handling the arrangements. Services will be held at a later date due to the COVID-19 pandemic. Memorial donations may be made to the Chesapeake Bay Foundation or a charity of your choice. Post condolences on parrfuneralhome.com.

Rosa Mae Kearney entered into eternal slumber on Saturday, July 25, 2020, at her residence surrounded by her loving family.... read more