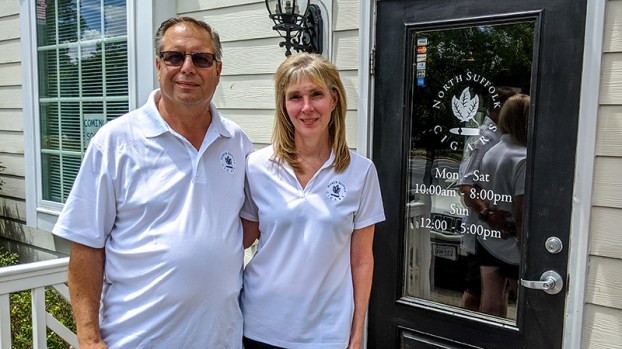 Bob and Marybeth Stephens stand outside North Suffolk Cigars, which opened Aug. 14 in the Shoppes on the Village Green shopping center in Governor’s Pointe.

Bob Stephens has dreamed of having his own cigar shop.

When the door opened Aug. 14 to North Suffolk Cigars, that dream came true.

On a recent afternoon, Stephens was with his wife Marybeth making last minute preparations and stocking the store with a shipment of 200 boxes of cigars.

His store, located at 1893 Governors Pointe Drive just off of Bridge Road in the Shoppes on The Village Green shopping center in Governor’s Pointe, will have a smoking lounge that will hold 10 people. He said when the coronavirus pandemic subsides, he expects to expand the capacity of the lounge by a few more people.

The shop also has an outdoor patio with furniture that has room for about 10 people.

He said the store would sell humidors, lighters and cutters and other cigar accessories. It also has a walk-in humidor that will hold 220 boxes of cigars. For now, just two people will be allowed into the humidor at a time to account for social distancing.

An Army veteran, Bob Stephens is making it a family-run business with his wife and son, Will, helping him run the store. He has been in the cigar business for 15 years, and he used to broker, or sell, cigars.

“I’ve always wanted to have my own place,” Stephens said, “and then this place became available and we decided to take the opportunity. Plus, we also know that northern Suffolk, over in this area, needs a place to have a nice lounge where people can come and sit and smoke.”

He said North Suffolk Cigars will sell all hand-rolled premium cigars from all the major brands — Montecristo, Macanudo and Rocky Patel, among others, as well as more select and harder-to-find cigars. He will also carry Zikar lighters, cutters and other humidors and accessories.

“The main part is to have the lounge, where people can congregate and sit and enjoy the time,” Stephens said.

The store will also have coffee and water for patrons, and it has a large-screen TV and leather chairs for people to sit in.

He said it was a challenge getting the store ready. Initially, the store was carpeted and he had planned to put flooring on top of that, but it didn’t work and he had to rip it all out. Then, the flooring that was in place was glued down and he had to strip out the glue. Stephens went with a polished concrete floor, giving the lounge a more rustic feel. Then he had the humidor built out.

He said he has other stock such as lighters and cutters on back order.

Inside the lounge, he has a Smokeeter that turns the air in it eight times per hour, which he said helps with the smoke and ventilation. The store has a gas fireplace, which will be used when the weather gets colder.

The August opening is a soft opening for Stephens, as he plans to have a bigger grand opening in the fall. He’s planning to host events at the store with cigar manufacturers, manufacturer representatives and having specials with their cigars. The store will offer 10% discounts “all day, every day,” for military and first responders, and he plans to offer a loyalty reward program.

“I’m super excited trying to get everything going,” Stephens said. “It was a little challenging getting it up and going in about a month. Now we’re ready to get going.”

With two years to go until he retires from full-time work, Stephens will have a heavy workload, but with his family’s help, he hopes to turn his passion for cigars into a successful business while filling what he said is a need in North Suffolk for a cigar lounge.

“This has been my dream,” Stephens said, looking at his wife, “and she’s coming along for the ride.”

By Wendy Harrison Not only did John Failmezger land a job at Sentara Norfolk General Hospital only two months after... read more