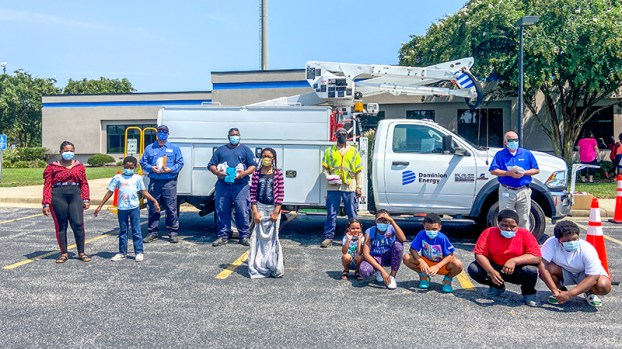 2. The Jumpstart class from Suffolk’s ForKids gave thank you cards and packages to the workers at Dominion Energy.

The JumpStart children at Suffolk’s ForKids visited Dominion Energy to thank the workers for their efforts restoring power after Tropical Storm Isaias that hit at the beginning of August.

In the summer, ForKids hosts its JumpStart Summer Prep program. These school-aged children ranging from first to eighth grade and learn about having healthy minds and bodies through life skills and community service.

“On Thursdays, we do community service events with our JumpStart kids,” said Logan Crews, one of the teachers at ForKids. “With Isaias, we wanted to talk to who helped us and give back to them, because we know they are still not done yet.”

The kids took turns to hand workers from Dominion Energy handmade thank-you cards and goodie bags. The goodie bags were decorated by the children and filled with a bottle of water, crackers, candy and other snacks.

“We are just here to thank you all so much for leaving your families to help ours,” said Kristen Schultz, another one of the teachers at ForKids.

According to Tommy Curran, the manager of operations and construction at Dominion Energy, there were about 65,000 work orders and 300 projects after Isaias brought tornadoes to Suffolk.

“We want to point out the real heroes here,” said Curran to the kids. “They make sure we have a critical need every day — electricity.”

The children were able to ask the workers questions about their job. Their questions included what they wear, what they do, and what happens when their power goes out.

Paul Kidd, one of the first responders, showed the gloves and the fire-retardant clothing they wear as they fix the wires.

Cecil Bell, a serviceman, explained that it’s all about communication when there are power outages.

“It’s all about taking one task at a time,” said Bell, “The biggest thing is knowing where everyone is in order to get power back as soon as we can.”

Tony Sykes, a service helper, answered the question about power outages. He said he lives in Hampton, so he cannot fix his own power, and the priority is never to fix theirs first.

The kids thanked the crew workers again, as the team talked about making plans for Hurricane Laura, which made landfall in Louisiana early Thursday and was expected to bring wind and rain to Virginia on Saturday.

Chick-fil-A is ready for something new