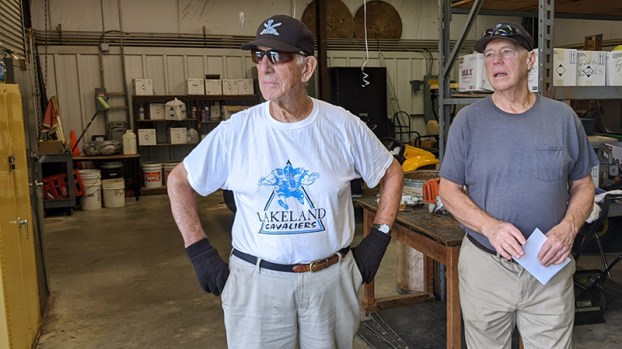 Roy Waller, left, and his son-in-law Ron Robertson are retiring from their positions as the groundskeepers at Lakeland High School. The two people who are replacing them are also in the family.

A grounds-swell of pride at LHS

On a recent Friday morning, Ron Robertson and Roy Waller were each mowing grass at different parts of the Lakeland High School campus. Robertson mowed an area used for field hockey, and Waller tending to the softball field.

The two have spent countless hours as a behind-the-scenes duo making sure the Lakeland fields were ready for practices or games. But that recent Friday, Aug. 28, was their last day on the job, as Robertson, 69, along with his father-in-law, Waller, 88, have retired from their work trying to make the school’s fields the best in the city.

It has been a labor of love, and of pride.

It’s that labor, and that pride in the labor, that made Lakeland’s fields as nice as they have been, according to Lakeland Principal Douglas Wagoner. He praised their character and example.

“This place has always been the best,” Wagoner said.

Why did they continue to do it at ages when most are fully retired?

“The kids, because the pay’s not lucrative,” Robertson said. “Both of us are retired, so we really didn’t do it for the pay.”

Robertson has another reason.

“When I played high school sports, things weren’t that well, and I said I’d always want to try to have things better,” Robertson said.

To keep the fields in pristine shape, Robertson said it was important to have good working relationships with everyone — coaches, administrators and students.

“We did a whole lot of things that didn’t really come into our contract, because we wanted to,” Robertson said. “But we just got to the point where age-wise, we couldn’t continue doing certain things.”

Weather permitting, the two were on the Lakeland campus daily for a few hours, depending on their schedules and what’s going on with the grass.

The work is important to the two of them, and while they liked being able to go at their own pace, that pace was still hard to keep up with tending to the more than 30 acres of fields on the Lakeland campus.

“We’ve got our areas that we work, and if one of us gets ahead, and the other one’s still working, then we’ll go in together and finish up,” Robertson said.

Robertson, who previously served as a coach in multiple sports and as Lakeland’s athletic director from 2004 to 2008, said he would missing seeing the coaches, administrators and the students who have been able to take advantage of the well-manicured fields.

But health issues, coupled with a desire to help his wife with virtual learning for their grandson, prompted Robertson, who had open-heart surgery in 2007, to retire.

For Waller, a former city councilman who began helping out after Robertson’s surgery, he is also mindful of his health. But he plans to use the extra time not mowing delving deeper into another passion of his — genealogy.

But the groundskeeping at Lakeland is going to stay in the family.

Robertson’s son, Nolan, who works for Suffolk Parks and Recreation, will be chipping in on those duties, as will Waller’s son, Daniel Waller, a social studies teacher at the school. The younger Waller’s wife and daughter will also pitch in.

“It is, and they won’t be filled completely,” Daniel Waller said. “But we’re going to continue the pride. It’s all about pride.”

Even on their last day.

As cupcakes brought for them went uneaten in the equipment shed by the football field, the two had to cut the commemoration of their legacy short.

They had work to do.

Starting up their riding mowers, Robertson and Waller rode out to the fields, tending to them one last time.

The JumpStart children at Suffolk’s ForKids visited Dominion Energy to thank the workers for their efforts restoring power after Tropical... read more