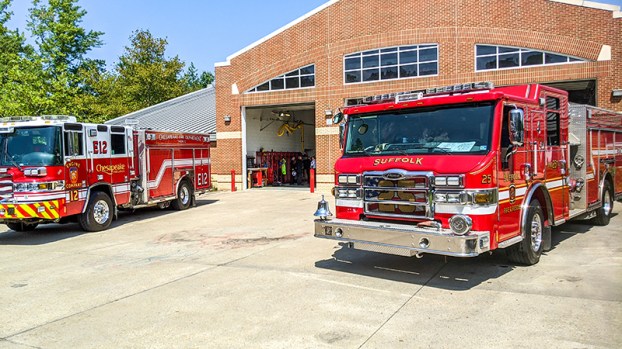 The Chesapeake and Suffolk fire departments announced an automatic aid agreement during a press conference on Thursday morning at Suffolk's Station 5.

Firefighters from both Suffolk Fire & Rescue and the Chesapeake Fire Department have been working over the past year to prepare for automatic aid responses.

And while Suffolk and Chesapeake have shared resources for years handling responses to areas like Route 58 near the Hampton Roads Airport as well as Churchland, Western Branch and North Suffolk, the two departments formalized their automatic aid program Aug. 6 and unveiled it publicly during a Sept. 3 news conference at Suffolk Fire Station 5 off of Bridge Road.

Suffolk Fire Chief Michael Barakey noted there are 22 critical tasks that must take place at the scene of each fire and cannot happen without firefighters who have the proper training and equipment.

“This automatic aid agreement will allow the closest fire apparatus, staffed with the most highly trained and well-equipped firefighters and officers to arrive to perform those 22 critical fireground tasks sooner than they ever could before,” Barakey said.

Barakey said the agreement could save precious minutes in response time in bordering areas by having resources automatically dispatched without a delay caused when either department has to request resources. Predefined locations along the border between the two cities will bring a response from both cities.

“You’d have to call the dispatch, and usually that took seven to 10 minutes to get the resources rolling. Now they’re automatically rolling and they’re there,” Barakey said as he snapped his fingers, “just as quick as we call them.”

Chesapeake Fire Chief Ed Elliott said the agreement erases the boundaries between the two cities in responding to emergencies, in a similar manner to other cities with similar agreements.

“Imagine a large map of Hampton Roads and visualize a big Hampton Roads metro area,” Elliott said. “And then put your mind on the line that goes in the Hampton Roads area from Suffolk to Chesapeake. Now in your mind, imagine a very large pencil with a very big eraser. And if you’ll take that pencil and go down the boundary line between Chesapeake and Suffolk, and erase that line in its most simplest form, that’s what automatic aid is.”

Firefighters from both Chesapeake and Suffolk have been involved in live-fire training together at the Virginia Beach Fire Training Center, where they worked to streamline communication and fireground tactics to prepare for the automatic aid responses. Fire administrators also shared policies, came up with new practices for dispatching calls and identified types of calls to help streamline the process.

In particular, people who live in areas such as Pughsville, Harbour View, College Drive, Burbage Lakes, up to the Godwin Bridge in Suffolk, and then in Chesapeake in the Western Branch area will see the outcome of automatic aid between the two cities.

Since the beginning of the agreement in early August, it has been used 17 times for nine residential fires, seven commercial fires and the Aug. 29 industrial accident at the Amazon construction site in Northgate Commerce Park, in which two people died.

The mayors for both cities — Linda Johnson of Suffolk and Rick West of Chesapeake — also gave short remarks praising the agreement, and members from both Suffolk Fire and Rescue and the Chesapeake Fire Department also attended the announcement.

Johnson said the Amazon incident is proof of the cooperation between the two fire departments, as well as the one from Virginia Beach, which also responded to the Amazon tragedy.

“This automatic aid program between our two cities,” Johnson said, “further emphasizes the emergency preparedness and response is truly a team sport.”