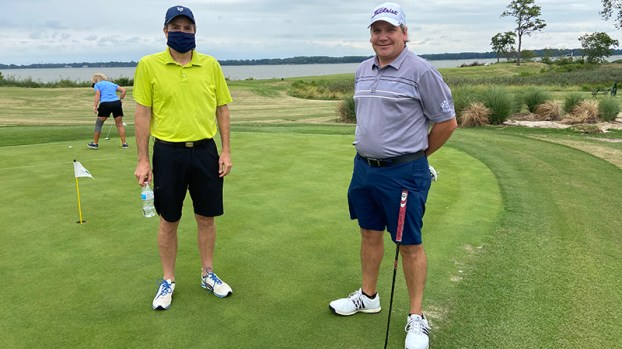 1. Bill Young and Jeremy Starkey practice their put before their turn for the golf portion of the ForKids Field Day.

ForKids held its annual event to benefit the Suffolk and Western Tidewater areas on Monday.

The annual ForKids golf tournament turned into a three-part, all-day event, including a walk, tennis, pickleball and golf. The attendance was nearly maxed out with 150 participants.

“It is an absolutely beautiful day for this event,” said Chief Operations Officer Bill Young. “There’s a great breeze, and we’re going to have a great time.”

The adult field day started with a two-mile walk around the Cedar Point Country Club. Fitness coach Tony Jay led the walkers in a series of stretches before beginning the walk. There was no official start, in order to keep walkers properly spaced. Once they arrived, the participants stretched and hit the track.

“It has been a great morning,” said Chief Executive Officer Thaler McCormick, who made her pickleball debut with anchor from the Hampton Roads Show, Kerri Furey.

On the outside courts, the Old Dominion University men’s coaches led the teams in a warmup to start the event. On the inside courts, rookie and veteran players took their chance to play pickleball. Since it was all played for fun, the winners were drawn for first and second place.

“The professionals led us in some training before we started, since about half of the players were first-timers,” said McCormick. “The experts were very gracious to us. It was a great time.”

The event ended with golf. Players had scheduled times every 10 to 15 minutes to start at their first hole. Golfers spent their time practicing their putts and drives or eating their boxed lunch before loading up their golf cart to begin.

“I have played every year except one since ForKids started this event,” said Jeremy Starkey from TowneBank, a partner with ForKids. “I am 100% glad that I was able to get out and support the cause again this year.”

To keep contact down, the raffle was moved to online. The tickets were priced at $25 each, with five for $100 and 10 for $200. Prizes included a fitness package, a one-of-a-kind pearl necklace, a gas grill, a home security system, and a sunset cruise. The raffle lasted until the next day to give everyone a chance to enter.

According to the smiles on both participants’ and staff’s faces, the adult field day was a success.

It’s no secret that the rural areas of Western Tidewater lack reliable access to broadband internet. For those families, who... read more