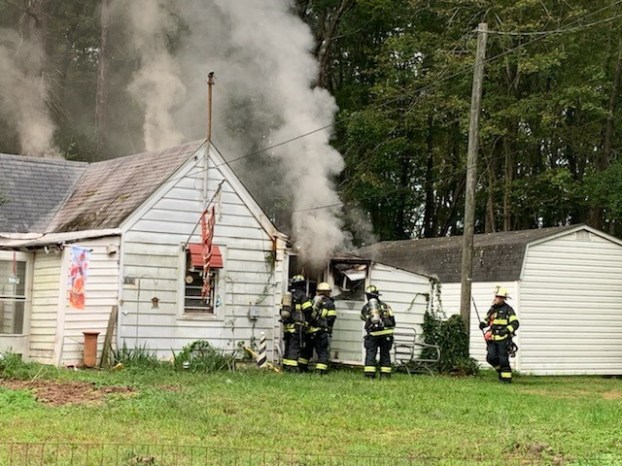 No one was injured in a fire to a Whaleyville home late Sunday afternoon, according to Suffolk Fire & Rescue. Submitted photo.

No injuries in Whaleyville fire

No one was injured in a fire to a Whaleyville home Sunday afternoon, though Suffolk Fire & Rescue remains on the scene.

Firefighters arrived on the scene to the 5500 block of Whaleyville Boulevard at 5:49 p.m., six minutes after Emergency Communications received the call, according to a news release.

Battalion Chief Chuck Knight said firefighters found moderate smoke showing from the single-story home, and no one was home at the time they arrived.

The fire was contained to one room of the residence, though there was smoke damage throughout the home. It is currently unknown how many people may be displaced.

Engines 1, 2 and 8, along with Tankers 1, 7 and 8, and Rescue 1, Medic 8, safety 1, Battalion 1 and EMS-1 responded to the fire. The Whaleyville Volunteer Fire Department provided assistance with an extra tanker if needed.

The Fire Marshal’s Office will investigate the cause of the fire.
Suffolk Police are providing traffic control in the area around the fire scene, and the area around the 5500 block of Whaleyville Boulevard will stay closed until Suffolk Fire & Rescue equipment is out of the road.