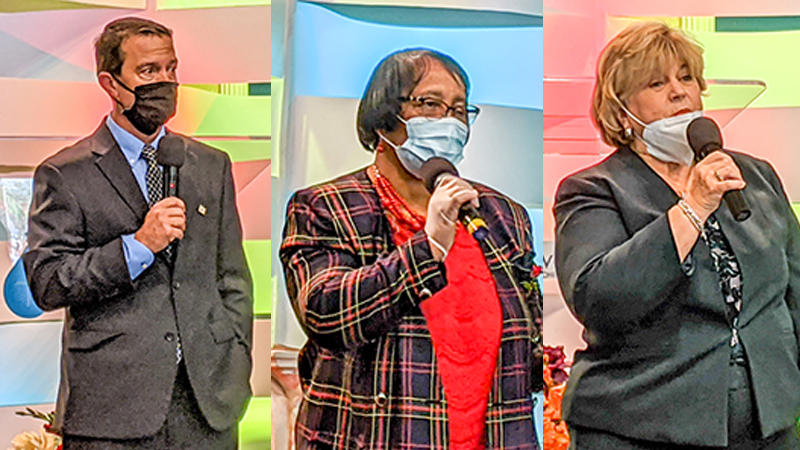 Candidates for mayor answered questions and outlined their views during a forum Oct. 3 at Living Waters Christian Center and sponsored by the Suffolk Coalition of Black Pastors.

Three of the four mayoral candidates attended — incumbent Mayor Linda Johnson, Brian Bass and Vanessa Harris. A fourth candidate, Mike Duman, did not attend the forum, though he attended a mayoral forum Sept. 19 at the same location with the other three candidates.

Mayor candidates were asked what attributes they want to see in a new city manager. Johnson said Patrick Roberts, whose last day was Oct. 2, had many of the attributes she would like to see in a new person — someone who is experienced, strong and confident, knows what they are doing and has a forward-looking vision for the city.

Harris said she wants someone who is qualified, skilled to manage the city and keeps a good relationship with the council. Bass said he wants a problem-solver and someone with a plan for the city.

Mayor candidates were also asked whether they supported a redistricting committee made up of council members and residents.

Bass said there should be more transparency in the process and supports a council/resident committee. Johnson said there needs to be stakeholder input throughout the process, and that  the outside consultant would meet with stakeholders to make a viable recommendation. She said everyone should have input to be sure to “get this right.”

Johnson also said she would govern by consensus, rather than counting votes to determine whether something will pass the council. Bass said decisions should be a collaborative process, and Harris said she would check with residents first before meeting to discuss issues.

Asked to rank budget priorities, Harris said she would rank education first, then bringing in business. Johnson said public safety and education would be her top priorities, with public works slightly behind that.

Candidates were asked what their greatest concern would be if they were not elected. Johnson said she did not want to dwell on her opposition and appreciates anyone willing to step up to serve, but added that it takes experience, and that being mayor is a full-time job.

“I don’t think we’re in a place in Suffolk where you just start as the mayor,” Johnson said. “I think you need more time.”

Bass said if he doesn’t win, he would continue to be an active member in the community.

“We all possess unique ambitions to … serve this community,” Bass said, “but for me, it’s a notch above. There’s sincerity in what I’m doing, and I have experience. We all have experience to do the job.”

Harris said no one has experience going into a job for the first time. However, she said her collective professional and community experience qualifies her for the position.

“I believe that we are all good candidates, but I also think that if you’ve been in the position for a long time, and there’s been no change,” Harris said, “why not try something different?”