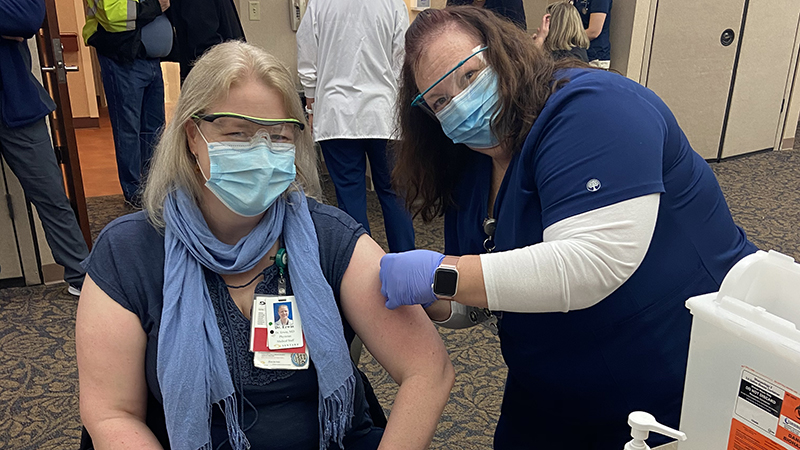 Dr. Eleanor Irwin said she would have shown up to get the Pfizer COVID-19 vaccine at midnight if she had been asked.

Instead, she was the first of a group to get the vaccine at 6:30 a.m. Thursday at Sentara Obici Hospital and said it went smoothly — “one of the best things ever about having to wake up that early.” Sentara and other hospital systems around the United States have been receiving the Pfizer vaccine over the last week and have begun giving it to their frontline healthcare workers.

Irwin, 44, an emergency medical physician who has asthma, was in the first group to receive the vaccine and said she was grateful to get it.

“I got it because emergency physicians along with ICU doctors are at higher risk,” Irwin said, “and Sentara has worked really hard to protect us employees. And even though I’m not an employee — I’m actually an independent contractor — they’re looking out for all the doctors and nurses and all the other folks that are working there too. So there’s no fear that we were going to get it.”

Irwin described the vaccination process as seamless and painless. She said those at Obici receiving the vaccine had been given information ahead of time, and they received a text message to use to let them check in should anything have changed.

Once at the hospital, Irwin said she got checked in at one of the four nurse check-in stations, sat down and then was screened in preparation for receiving the vaccine, including being asked whether she had ever had any allergic reactions. Nurse Donna Foreman then administered the vaccine before Irwin was scheduled for her second vaccination three weeks later, as the Pfizer vaccine requires a second dose.

Just like any other vaccination, Irwin said she waited for about 15 to 20 minutes just to be safe, and then she was able to leave. Nurses were on standby if needed, and they were also there to observe people after receiving the vaccine and schedule the appointment for the second dose.

Irwin said everyone came in wearing their PPE and was distanced at least six feet apart.

She said she had read up on the Pfizer vaccine and kept current on the trials while reading all the information she could about it, as well as following the vaccine through the Food and Drug Administration process.

“I felt very, very good about it,” Irwin said. “There’s certainly shots that are much bigger and more uncomfortable, like a tetanus shot. But really, it didn’t hurt at all. It’s not a very large-volume shot. Some vaccines have a much larger volume, more CCs (cubic centimeters). This one is very small.”

With her husband a firefighter-paramedic in Portsmouth, both have not been able to see extended family in the Midwest since the start of the coronavirus pandemic, and said it was very unusual to have a small turkey for Thanksgiving. She said what they know now about COVID-19 is so much different than six months ago, and that they will know even more in six months’ time.

“You’re just working really hard to try and keep up on all the medical literature, what are the best treatments, what can you do for your patients. Is it more stressful? Yeah, because you care about your patients.”

The vaccine offers something many have grasped for, and yet she, like other medical professionals having to deal with an uptick in COVID-19 cases, knows the worst isn’t over.

“It feels a little less stressful today knowing that we have more tools to fight COVID.”

After thinking about it for a moment, she thought of a different way to say how she felt about receiving the vaccine and its promise for the future.

“Maybe less stressful was the wrong word to use,” Irwin said. “I’m more hopeful today. We have a long way to go. But I think there’s hope.”