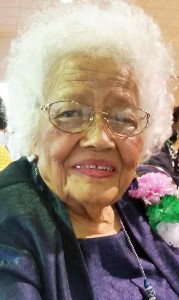 Ruby Holland Walden, 99, of South Quay Road, went home to be with the Lord on Tuesday, Dec. 22, 2020. She was born on Oct. 20, 1921, in Holland, Nansemond County, now the city of Suffolk, to the late Axium J. Holland and Pearl C. Langston Holland. She was the sixth of seven children born to this union, all of whom preceded her in death: Gladys, Stanley, Thelma, Doris, Roswell and Reginald.

Ruby was a lifelong resident of Nansemond County/Suffolk, receiving her primary education at the two-room, one-teacher Silver Spring School, and her high school education at the Nansemond County Training School, graduating in 1938. In 1946, Ruby married her high school sweetheart, the late Frank LeGrant Walden, and to this union, four children were born: Janice, Olin, Sandra and Pearl. With their four bundles of joy, they journeyed through life for 57 years with love, devotion, faith and trust.

Soon after Ruby and Frank married, they stepped out on faith and started their own contractor business that specialized in brick masonry and operated for 39 successful years, while also farming more than 100 acres of family-owned land. While serving as the bookkeeper for these businesses, Ruby was active in the civic and political processes that affected the people of her community, city, state and nation, while encouraging African Americans to be knowledgeable, and involved in matters that affect them. Over the years, Ruby served on more than 30 boards, commissions, organizations, study groups and task forces.
Ruby was dedicated to improving the inadequate education provided for Black children, especially in Nansemond County, and served on a committee formed to file a suit against the Nansemond County School System for the equalization of all schools in the late 1950s. As secretary of the committee, she continued to work on these efforts after the suit was won and through the initial integration of public schools. For over 25 years, she proved to be a strong, forceful, and vocal advocate for those efforts.
In the mid-’60s, Ruby was one of the organizers of The Southeastern Tidewater Opportunity Project (STOP), a Community Action Program (CAP) Agency created to administer federally-funded educational, health, housing, employment and human service programs throughout the Tidewater area. Ruby was hired by this agency as the teacher of the first and only Head Start program in Nansemond County and later became the Community Service Coordinator for Suffolk, Isle of Wight and Southampton Counties. The Head Start Program was very endearing to her because it gave disadvantaged children a head start before public school and provided a valuable step forward for their early school years…and she loved every one of the children.
Ruby’s parents carried her to Mt. Sinai Baptist Church from infancy, and at 12 years old, she was baptized and joined the church. She was a full time, active member, serving in almost every class, program, ministry, office and auxiliary of Mt. Sinai until her health declined: Secretary of the Sunday School, Treasurer of Senior Missionaries, President of the Pastor’s Auxiliary, Superintendent of Vacation Bible School, two times Clerk of Church, and chaired many other committees, special programs and projects. She chaired the Initial Steering Committee for three years for the building of the present Family Life Center at Mt. Sinai and organized The Guild Girls Organization, for girls ages 12 to 16 years old. Ruby served as secretary to the Bethany Baptist Association for 12 years and represented the church in many other associations, conventions, and unions throughout her life.

Ruby received numerous awards, plaques, letters of appreciation and certificates, including the prestigious “Athena Award” by the Suffolk Division of the Hampton Roads Chamber of Commerce in 1992; the “Senior Health Hero Award” for the Southeastern District of Virginia by Bon Secours Health Services and Senior Services of Southeastern Virginia in 2008; recognition for 37 years of service to the Sickle Cell Anemia Association in 2012, to name a few. She was proud to be selected to visit the White House with other senior citizens from across the nation for a ceremony sponsored by President Barack Obama in 2011.

Her motto in life was, “I cannot do everything, but I can do some things. What I can do, I ought to do. What I ought to do, with the help of God, I will do.” Because of her strong Christian values and faith in God, when she heard of a need, she responded by freely giving her time, service and resources to meet those needs, whether it was for a friend or a stranger.
Ruby always loved to write, frequently writing poems and editorials to the local newspapers. She enjoyed life, learning and new experiences: in her 60s, she learned to use the computer, went motorcycle riding at age 80, and took a helicopter ride at age 90, which she recalled as the most enjoyable and exciting experience that she had ever had.

Ruby’s service will be private; however, a public viewing will be held from 11 a.m. to 7 p.m. on Thursday, Dec. 31, at the Wm. M. Johnson & Sons Funeral Home. You are invited to view the service at 1 p.m. on Friday, Jan. 1, via this link: https://client.tribucast.com/tcid/52396609.
In lieu of flowers, donations may be made to the National Museum of African American History and Culture in memory of Ruby H. Walden at https://nmaahc.si.edu/connect/give.

A service with dignity will be conducted by Wm. M. Johnson & Sons Funeral Home Inc., 224 S. Main Street, Franklin. Friends are invited to share memories and sign the online guestbook at https://www.wmjohnsonandsons.com.
Due to COVID-19, please adhere to guidelines set by the state of Virginia.