Charles Brown, of Franklin, said his COVID-19 injection didn't hurt when he received it during a mass vaccination event at East End Baptist Church on Wednesday.

East End Baptist Church in Suffolk was the site of a mass COVID-19 vaccination event on Feb. 10.

For some recipients, there was only a mild and very brief sting at worst, but most others reported they hardly felt anything at all. In either case, they know what to expect on returning next month for the second part of their immunization.

In the parking lot outside, Russell and Mary Ann Hancock were about to return to their home in Drewryville after their visit.

“It was an easy experience,” she said.

Their daughter, Shawn Daniels, of Suffolk, came to see them.

“It’s been over a year they haven’t gotten to see their grandchildren or great-grandchildren,” she said. “I haven’t been able to hug my mother.”

Inside, Will Drewery, the emergency manager for the Western Tidewater Health District, said the set-up for the day’s event was done on Tuesday, and everyone was able to begin the event 45 minutes early.

Drewery estimated that from the time that each person walked in the church on Portsmouth Boulevard for his or her COVID-19 vaccination to the exit was 15 to 20 minutes — and the shot itself took up only 30 seconds.

“The shots are the easy part,” he said. “It’s the before and after that take more time.

“When people made their appointments [on Feb. 4], we collected emails and 700 of the thousand were able to pre-fill their applications,” said Drewery, pointing out both an express lane and another line for those providing needed details such as name and locality.

In the space where people got their injections, Drewery pointed out that these were being done by several volunteers such as regional medical assistant Sandra Ruiz, who took care of Abby Porter of Carrsville (“She was good!”).

Also in that room, people from Bayview Physicians assisted with data entry.

“We have a really, really good partnership with them,” he added.

Charles Brown of Franklin learned of the event through the city’s health department, and also said the shot didn’t hurt.

Sonny Draper of Boykins was brought in by his daughter, Lu Haywood, of Newport News.

As Booker Patterson of Ivor waited for Ann Mandel to inject him, he said he learned of the vaccination through the Southampton County Health Department.

Moments later, “I didn’t hardly feel it,” he added.

Last week, numerous residents of Western Tidewater attempted by telephone to make appointments either at their respective health clinics or this event. One of those who got through was Joe McClenny from Courtland. He first called 76 times in the first hour that Thursday morning, but always got a busy signal, and later a recording that the health department was closed. But he decided an hour later to try again, and a young man answered, told of the Suffolk event and made him an appointment right then.

“The vaccination was as easy as could be,” McClenny said in the waiting room after his shot. “Everything went smoothly, and I didn’t feel a thing.”

He added that the pandemic has kept him and his wife mostly at home.

“We’re not going — my wife and I — to many places, and when we do go, we’re very careful. And we don’t have a lot of friends over. We don’t go to any parties anymore. It’s just affected our lives totally. I never thought it would be like that.”

“I am one of those [people] that are not fond of needles, so I really have to psych myself up before I do an injection,” said Deborah Person of Suffolk. “It was not as bad as I thought. You know, I didn’t feel it. I’ll be back March 10 at 9:30 a.m. for my second injection.”

Speaking about how the pandemic has affected her this past year, Person said, “It’s been overwhelming. Not being able to be with your family. I have children and grandchildren. It’s hard to see them. I do talk to them. So it’s really … it messes with your livelihood. But you know I go by the CDC rules and regulations to wear my mask and keep my hands clean and stay social distanced. If I have to go out it’s usually for my doctor’s appointments and to the grocery store and that’s it. I’m home.”

Hugh Byrd of Boykins heard of the vaccination and even though he knew of other people skeptical about it, he had no second thoughts about getting his.

There was no problem with his injection, and Byrd intends to encourage other people to get theirs as well.

“Everything was very smooth. We went through the line very quickly. The shot was not painful. So there was no reaction to it,” she said. “At least not yet, I don’t think so. We’re old hands at being poked.”

Of the pandemic’s effect on their lives this past year, Cynthia said, “It’s a lot of reduced socialization. It’s a little more difficult to do everything. I order my groceries. I don’t see family as much — hardly at all.”

She’s not personally aware of anyone skeptical about getting the injections.

“Most people are just anxious to get it and having a hard time getting it,” Cynthia added. “In order to get the vaccination, I think everybody needs to keep up on the news. I think they need to read what’s on the Virginia Department of Health [website] to find out what the rules are, and they need to keep with all the different resources to find out where and when they can get registered and get a vaccine.” 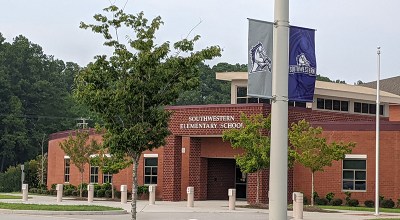