Squeezing in the holidays 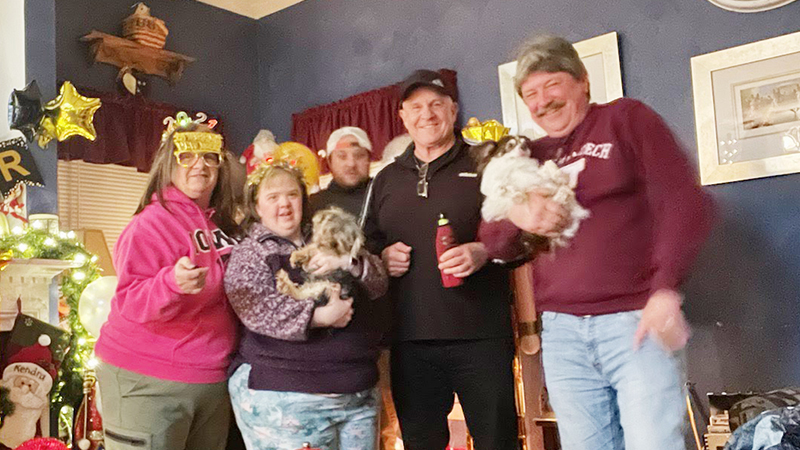 After a family spent 10 and a half months away from each other due to COVID-19, the one week they had to spend together was full of every holiday they missed.

Kendra Conrad has Down syndrome and was so excited to gain some independence by moving into a group home. It provided her with a job and group activities that she could be a part of. She had the freedom to come home for the day, see her family and her dog and go back to the group home. Sadly, shortly after moving in, COVID-19 came and put everyone under lockdown.

“She was very patient,” said Paula Ridenhour, Kendra’s mother. “She was more patient than us. Every time there was a setback, we would be terrified of how upset she would be. She was fine every time. She’s a tough cookie.”

Her family could visit through her window or on porch visits, but they had to stay six feet away. As the pandemic kept dragging on, Kendra kept telling her family how they kept missing holidays, and they promised that they would celebrate when they could be together again.

“She would always tell us ‘I miss it’ every time a holiday would pass,” said Ridenhour. “We kept promising her we’d celebrate it when we could be together. We thought it would be a few weeks, not 10 and a half months.”

Once the time finally came, Kendra could finally go home to celebrate 10 months of memories in seven days. Her mom promised they would keep all Christmas decorations up until they could celebrate together. On Jan. 22, she came home to start the festivities.

During that week, Kendra got to do all she had wanted since being stuck in her group home. The families went to a Mexican restaurant, ate Thanksgiving dinner, celebrated Christmas Eve and Day, got her hair done for the first time in over a year, went to Top Golf, passed out candy to trick-or-treaters and rang in the New Year.

“We had all kinds of fun,” said Bobbi Conrad, Kendra’s stepmother. “At the end, we were all worn out but it was worth every bit of it.”

Kendra’s favorite part of the week was finally getting her “mommy snuggles.”

“I just kept touching her because for 10 months I couldn’t,” said Ridenhour. “It was just so nice to have her home.”

According to both Ridenhour and Bobbi Conrad, the highlight of the week was Halloween. Kendra’s favorite holiday is Halloween, because she loves passing out candy. A Facebook announcement told friends and Bobbi Conrad’s neighborhood of their plans to recreate Halloween and asked to try to be in costume, but at least stop by.

According to Bobbi Conrad, over 65 people from the neighborhood, not including their friends, stopped by, and most were in costume. They had put together little baggies of chocolate to hand out to those who stopped by. This also gave Kendra a chance to see friends she also hadn’t seen since the COVID-19 lockdown started.

The delay in the holidays came after the first time they tried to bring Kendra home and she tested positive for COVID-19. Out of her housemates, 11 out of 12 tested positive, and Kendra was the only one to be hospitalized.

“She could not have been in a better place than Obici Hospital,” said Bobbi Conrad. “They treated her like a princess. She had her phone with her and we would video chat and she would introduce us to her nurses, or her friends she’d made. She brought so much joy to them and she was so sad to leave. Kendra is very social and loves to see people and make friends.”

Kendra’s family was able to do a porch visit to see her for Valentine’s Day and cannot wait for the next chance they have to bring her home again.