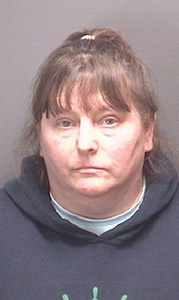 Suffolk Police have arrested a woman after responding to a welfare call on Monday regarding the alleged abuse and neglect of children.

Officers responded to the single family residence in the 500 block of Valor Court and, upon preliminary investigation, found that two male juveniles were forced to sleep outdoors in a tent regardless of weather conditions as a form of punishment, according to a city press release. Living conditions within the home were also found to be in poor condition.

Tiffany Alexandra Antonucci, age 52, of Suffolk, was arrested on a total of 15 charges including abuse and neglect of children (5 counts); cruelty and injuries to children (5 counts); and contributing to the delinquency of a minor (5 counts).  She was transported to Western Tidewater Regional Jail.

“Suffolk Public Schools is aware of the current allegations and charges and will not have any comment until the investigation is completed, with respect to the due process of the legal system,” Ward stated.