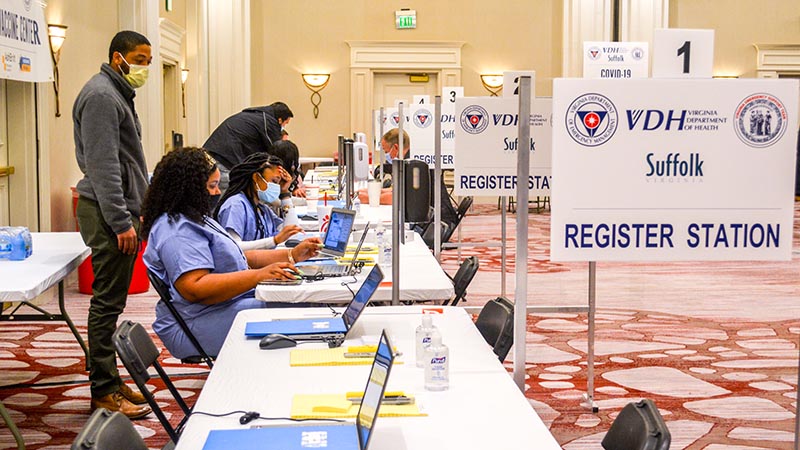 Volunteers prepare to enter data at the vaccine clinic in Suffolk.

The federally-funded sites serve as fixed locations where those eligible for a COVID-19 vaccine can come to get their shots. The Suffolk site, intended to serve the Western Tidewater Health District, will administer 250 doses of the Moderna and Pfizer vaccines a day over the next 45 days.

But it’s not a walk-in clinic. Only those who have pre-registered, either by calling 1-877-VAX-IN-VA or signing up on the state’s vaccinate.virginia.gov website, and have been contacted to schedule an appointment will be allowed to enter.

Those with appointments are being asked to arrive no earlier than 20 minutes prior to their scheduled time so the wait lines aren’t any longer than needed.

“Everything is timed down to the minute,” Suffolk city spokeswoman Diana Klink said.

The entire process, from exiting your vehicle in the parking lot to the shot going into your arm, takes about 20 minutes, she added. When that’s done, you’ll be ushered to the observation area, where you’ll wait for 15 to 30 minutes, depending on your history of allergic reactions, and be given a card and sent an email with information on how to schedule your second dose.

For non-English-speakers, there’s a machine in the registration area that can interpret almost any language, including American Sign Language.

“There’s something valuable about having a fixed site where people can come once they are pre-registered and have received an appointment,” said Dr. Lauren James, interim director of the Western Tidewater Health District.

Similar sites in the cities of Danville, Portsmouth and Petersburg opened in March. According to Bruce Sterling, regional coordinator for the Virginia Department of Emergency Management, the state picks locations for mass vaccination centers by looking at various factors like people of color, people with lower incomes, people without jobs and people without transportation.

The Suffolk site was initially advertised as having the capacity to administer 1,000 doses a day, which was slashed to 250 “based on the number of people signed up” using the state’s advanced registration system, Klink said.

At the end of March, Virginia Department of Health officials announced its lists were starting to run low on registrations compared to the number of vaccine doses available, though some in Western Tidewater say they’ve already pre-registered and still haven’t been contacted for an appointment.

“We have seen issues with that,” James confirmed.

“Now you can log back into your account and confirm that you’ve put everything in correctly, and they also have a phone number you can call,” she said.

Since the rollout of the vaccines, Virginia’s weekly COVID-19 diagnoses have dropped sharply from the record-high caseload seen in January, but in some parts of the state, cases are once again on the rise. The city of Franklin is averaging 33.9 new cases per 100,000 a week, and has been trending upward for 17 days — giving it the highest per capita seven-day average of any of the Western Tidewater Health District’s four member localities, according to VDH data. Suffolk appears to be doing the best job keeping new infections under control, having been trending downward for 19 days to 7.9 per 100,000 — the lowest per capita rate of the four localities.

That said, testing “doesn’t always detect new cases, so percent positivity just shows how many positives you have; it’s not a true reflection of how many new cases,” James said. “There are a lot of factors, but the goal is to get to herd immunity.”

Herd immunity refers to when a sufficient percentage of an area’s population becomes immune to a disease, either by getting it and recovering or becoming vaccinated, at which point the virus has nowhere left to spread. James is hoping the Western Tidewater Health District will reach herd immunity by this summer.

Clinical trials of the Moderna and Pfizer vaccines showed an efficacy of 95% and 94% respectively, and a “real world” U.S. Centers for Disease Control study spanning Dec. 14, 2020 through March 13, 2021 showed a 90% reduction in risk of infection two weeks after receiving the second dose of either shot. While there have been some instances across the nation of people becoming infected with COVID-19 two weeks or more after having received their second dose, James isn’t aware of any such post-vaccination infections in Western Tidewater. A vaccinated person can also theoretically still transmit the disease to an unvaccinated person, but the risk is low.

“What the vaccine covers is it prevents you from getting severe disease or deaths, but it does not prevent all of the disease 100%,” James said.

To get the vaccine into arms in communities of color and underprivileged areas, the VDH is also partnering with churches.

“They give us lists and then our team works to call those people or email them invites to the clinic,” James said.

The Western Tidewater Health District entered vaccination Phase 1C this week, which expands vaccine eligibility to essential workers not covered in phases 1A or 1B, including those in the energy, construction, food services and other fields. According to Connor Smith, who recently took over for Will Drewery as the health district’s emergency manager, Western Tidewater has about 1,500 so far who have pre-registered as Phase 1C or Phase 2. Virginia expects to expand eligibility to all Virginians age 16 and up by April 18.