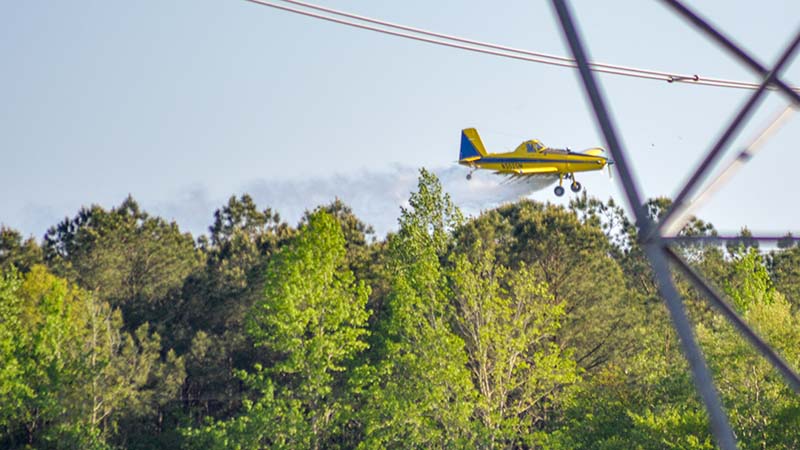 The city of Suffolk’s annual Summer Burn Ban, which begins May 1, came none too soon after the previous week featured a large brush fire in a rural area of the city as well as a Red Flag Warning from the National Weather Service.

The brush fire initially began in the 3800 block of Deer Path Road and extended deep into a rural, wooded area, according to a city press release. Multiple residents in the area of 3457 to 3875 Indian Trail Road were evacuated from their homes while firefighters fought the blaze by land and by air.

Charges have been placed against a homeowner in relation to the fire, Suffolk Fire & Rescue announced Friday.

Richard L. Hill, 43, is charged with careless damaging property by fire, a Class 4 misdemeanor; disobeying the 4 p.m. burn law, a Class 3 misdemeanor; and deliberate or negligent burning, a Class 1 misdemeanor.

According to a city press release, Hill contacted firefighters after he was unable to extinguish a fire he had started while burning a stump on his property in the 3800 block of Deer Path Road

About 40 acres of woodlands were burned during the incident, the press release stated.

The Virginia Department of Forestry air-dropped four loads of water, each totaling 475 gallons per load, to aid in firefighting efforts. Engines, brush trucks, tankers and plows all responded to fight the conflagration, which jumped multiple fire lines despite efforts at containment.

There were no injuries in the fire, which was finally called under control that evening, and its cause remained under investigation. In addition, the fire marshal suspended open burning in the city beginning Tuesday afternoon and allowed the ban to last until Saturday, the beginning of the Summer Burn Ban.

“Suffolk Fire Marshal Chris Cornwell has instituted this action due to current gusty and dry conditions,” as well as the brush fire when it was still active, a city press release stated.

There is no open air burning allowed in the city from May 1 to Sept. 30.

This restriction comes from the Virginia Department of Environmental Quality and was also adopted as an ordinance by Suffolk’s City Council in January 2007 to improve the city’s declining air quality and to reduce the number of responses for refuse, grass, brush and woodland fires.

The open burn ban includes all types of burning, from burning in a barrel to commercial land clearing operations. The use of special incineration devices is also included. In Suffolk, failure to comply with the burn ban can result in a fine of up to $2,500 and one year in jail, as well as a bill for extinguishing the fire.

Citizens are encouraged to take advantage of the city’s bulk pickup service to remove yard debris or to carry the debris to a local landfill for disposal. In cases where large quantities of debris are involved, property owners may want to consider hiring a contractor to remove the debris.

Commercial fire pits, fire bowls and chimineas are considered recreational fires by city code and do not require a permit. Only approved materials (firewood) may be burned and the fire must be constantly attended until it is extinguished. Some method of extinguishment must be available (fire extinguisher, garden hose, etc.) for immediate utilization. The code also states these devices shall be used in accordance with the manufacturer’s instructions, and shall not be operated within 15 feet of a structure or combustible material. These devices are exempt from the Summer Burn Ban.

For additional information on open burning in the city, go to www.suffolkva.us/open-burning-and-recreational-fires, or contact the Fire Prevention Bureau at 757-514-4550.