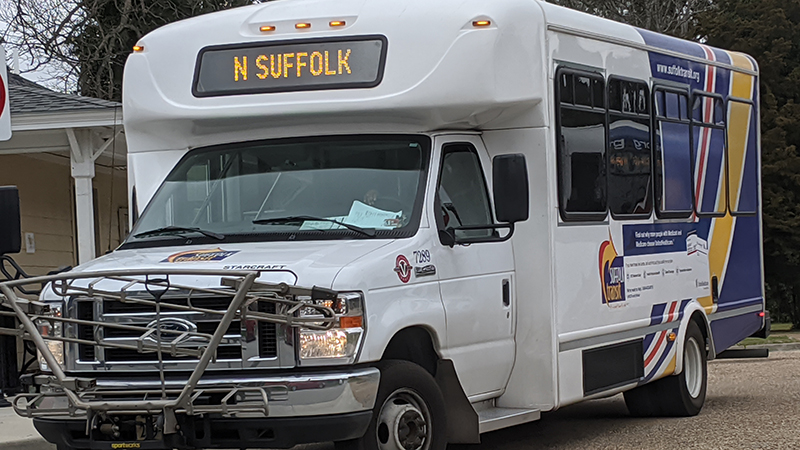 A public hearing on the proposed changes will be held during City Council’s July 21 regular meeting, which starts at 6 p.m. at City Hall.

The Saturday-only Blue Route, a roughly 45-minute loop route that begins and ends at the Downtown Transfer Station, would be eliminated, with elements of its route absorbed into other routes. The current Blue Route has stops at residential and commercial areas off of North Main Street, stretching from the Food Lion area on Portsmouth Boulevard to another Food Lion on Holland Road — with stops in between — and moving through the Saratoga neighborhood before finishing its loop at the transfer station.

The new Yellow Route would serve a short segment on North Broad Street and West Constance Road currently served by the Red Route, while the Green Route would absorb part of the Yellow Route area south of West Washington Street.

Transit officials identified the Yellow Route as a candidate for blending multiple elements of its route with an altered Pink Route, which is being adjusted to add stops on Nansemond Parkway, Progress Road and Wilroy Road.

The adjusted Pink Route, which currently serves as the connector route to downtown, the Hampton Roads Transit transfer station at Chesapeake Square and North Suffolk, will now serve the HRT transfer station in Chesapeake in both directions. The Pink Route would have an extra hour of service, going from 6:30 a.m. until 5:30 p.m. Monday through Friday, eliminating the current break at 9:30 a.m.

Suffolk Transit plans to change the Green Route by realigning it into a two-way service, preserving what it says are the most productive segments of the route and creating new and direct connections to popular destinations. It would operate between King’s Fork High School, the transfer station and the Saratoga neighborhood south of West Washington Street. A segment of this route from the high school to CCAP would be discontinued, and the route would no longer go to the Main Street Shoppes or the Western Tidewater Community Services Board.

The Saturday routes would be the realigned Green, Yellow and Pink routes, along with the existing Purple and Orange routes, which would still operate from 7:30 a.m. until 4:30 p.m.

The proposed changes, if there are no other alterations of routes, would take effect Sept. 7. More details, and maps of the proposed route changes, can be found at suffolktransit.org.

This comes after the city received $2.6 million in federal American Rescue Plan Act and Coronavirus Response and Relief Supplemental Appropriation Act money. The project is in the city’s fiscal 2022-2031 capital improvements project and plan.

The city also received nearly $872,000 in federal money for its public transit service for the current fiscal year, $44,809 more than what was included in the adopted fiscal 2022 transit system fund budget estimated at $827,117. The extra money will be used for operational expenses.