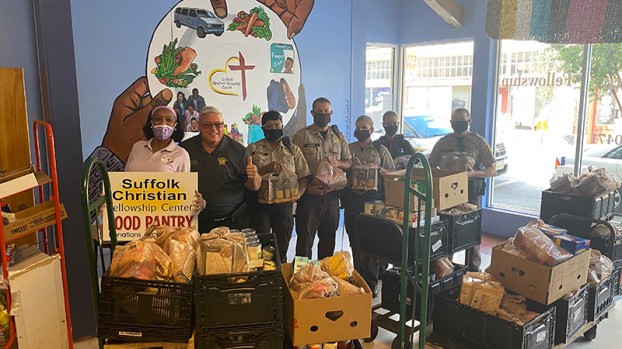 The Suffolk Sheriff's Office kicked off Hunger Action Month for Suffolk Christian Fellowship Center by hosting a food drive at the Kroger Marketplace, North Suffolk. Their efforts yielded a total of 911 pounds of food that will be used to help us "Feed our Neighbors in Need." (Submitted photo) 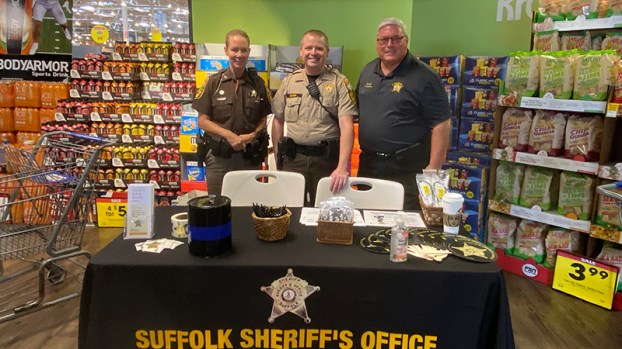 Twice a year, the Sheriff’s Office holds a food drive at the Kroger Marketplace on University Boulevard. They collected food donations as well as money to go back into the grocery store to buy more.

“We are glad that there’s a way we can help,” said Sheriff E.C. Harris. “Many are facing food shortages and tough times right now.”

According to the deputies collecting the donations, Suffolk residents were more than generous in their contributions. Many gave up to $50 and $100 donations to buy more canned food donations.

The canned food drive will support Suffolk Christian Fellowship Center on East Washington Street. This foodbank has tirelessly provided food for the community during the pandemic and the displacement of residents at Suffolk Towers.

“Lorna Slaughter has done a lot of good work for Suffolk, and I’m glad we can help,” said Harris.

The Sheriff’s Office is known to easily fill four of their large vehicles with food collected during these events. This year, they were proactive and brought their big truck, too.

The Sheriff’s Office there not only to collect but also to give back. At their table, they had Suffolk Sheriff’s Office items, including fans, pens, stickers and car air fresheners. However, these weren’t the main item at the table.

“We’ve had many people come up today just to get a gun lock,” said Harris.

According to Harris, there has been a rise in incidents involving juveniles and firearms. This cable gun lock is specifically designed as a child protection lock that works by threading a steel cable through the chamber to prevent a magazine from being loaded. The Sheriff and deputies were also there to inform Suffolk residents about legislation passed making it a misdemeanor to knowingly let a child under 12 handle a firearm without adult supervision.

“Folks need to secure their firearms so that juveniles can’t accidentally hurt themselves or someone else,” said Harris. “Once that shot goes off, there are no redos. You can’t take that back.”

On Sept. 11, the Suffolk Sheriff’s Office will be at the Taste of Suffolk street festival on North Main Street, handing out more gun locks to anyone who is interested.