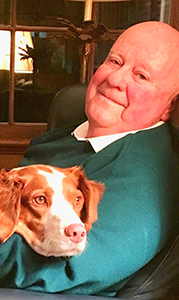 He was born on June 9, 1933, in Suffolk to Thomas Eugene Pruden and Marie Oliver Pruden. He was a 1951 graduate of Chuckatuck High School. When Tom first saw the “rolling hills of the Blue Ridge Mountains” outside of Charlottesville at 17 years old, he knew the University of Virginia would be his alma mater. While at UVA, he was a member of the Army ROTC and brother of Pi Kappa Alpha fraternity. He graduated in 1955 with a Bachelor of Science in education. Tom was a UVA Wahoo through and through and a longtime supporter of the Virginia Athletics Foundation. Upon graduation, he commissioned as a lieutenant in the U.S. Army and served on active duty from 1955-57. He retired with the rank of lieutenant colonel after 28 years in the Army Reserves.

Following active duty, he returned to Suffolk, where he taught and coached at Holland High School and Forest Glen High School until 1967. Tom truly loved coaching and mentoring his student athletes. Those friendships remained over the years, and in 2005, the Holland Dutchmen honored him with a tribute and reunion. During his ensuing 32-year banking career, he worked for United Virginia Bank and Essex Bank.

Perhaps because he was an only child, “Pops” delighted in his ever-growing loving family. He was so proud of his children and grandchildren and the values they shared. Both family and friends encouraged Tom to tell and retell his library of lifetime stories. Plenty of laughter and joking always followed. He was not a big talker, but when he did speak it was honest, open and filled with wit. He thoroughly enjoyed spending time at his Hoos Happy House in Nags Head, North Carolina and going bird hunting. Give Tom his loyal bird dog, a crisp autumn day, and a field with hedgerows, and he was in heaven just as he is now.

He Cheered our Hearts and Warmed our Souls. WAHOOWA!