At approximately 9:34 p.m. Nov. 5,, the Division V Communications Center received a call from a female victim stating that she had been involved in a road rage incident, according to a press release from VSP spokeswoman Sgt. Michelle Anaya.

The initial road rage incident and shooting occurred in the northbound lanes of Interstate 664 at the Route 58 interchange. The female victim was traveling in a 2022 International Tractor Trailer when she observed a black Nissan Altima enter the interchange from Interstate 264, merge onto I-664 and almost strike her vehicle.

The victim sounded her horn at the vehicle. The driver of the black Nissan sedan sped up in front of her, and the male passenger leaned out of the window and fired several rounds at her vehicle. The female victim was not injured and immediately pulled over to contact state police. The suspect vehicle continued northbound Interstate 664.

The sedan was reported to have heavy damage down the driver’s side of the vehicle.

The Virginia State Police is reaching out to the community for any witnesses driving in the area of northbound Interstate 664, in the vicinity of the I-264/Route 58 interchange (Bowers Hill area) prior to, or after the incident, who may have seen the incident occur, or have possible information. Anyone with information about this shooting is encouraged to contact the Virginia State Police at  757-424-6800 or at questions@vsp.virginia.gov. 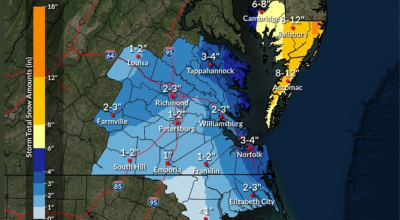