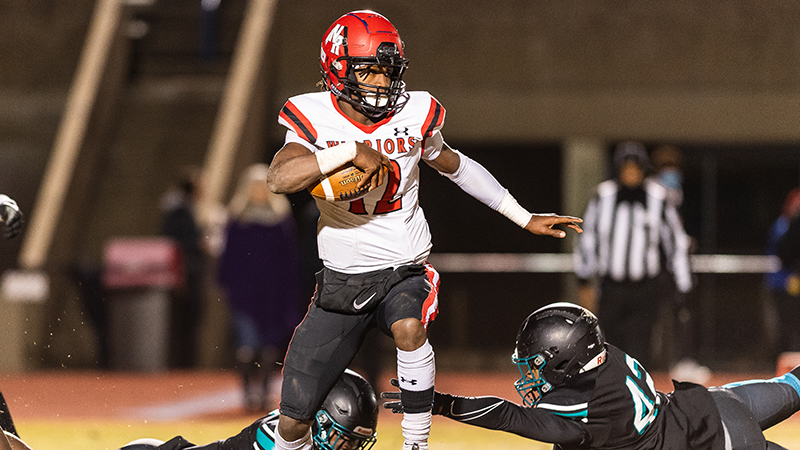 Nansemond River High School junior Nolan James runs for yardage against host Woodside High School on Nov. 19 in the Region 5B semifinals. He ran for more than 100 yards in the game. (Beansprout photography by Sarah Murphy)

Nansemond River High School’s varsity football team found its footing in the second half of its Region 5B semifinal game Nov. 19, but ultimately the No. 3 Warriors saw their 2021 season come to an end against No. 2 Woodside High School.

The Wolverines (7-2) hosted the Warriors (5-5) in the game Friday night at Todd Stadium in Newport News and generated 21 points in the first quarter and 19 in the fourth to advance to the regional final with a 40-22 victory.

“I thought we played well, just not good enough execution in the first half,” Nansemond River Head Coach Alonzo Ricks said. “After halftime we settled down and played like we knew how and how we expect to play every game, all game.”

NR scored 15 of its 22 points in the fourth quarter.

Despite the loss, Warriors junior Nolan James threw for more than 300 yards and rushed for more than 100. NR junior Nasir Holland finished with eight catches for 202 yards and two touchdowns.

Nansemond River finished the 2021 season with an overall record of 5-6, including the two playoff games.

Ricks said he will remember this Warriors team as “a hardworking, gritty, hungry bunch of young men. Those guys handled everything that was dealt to us and found a way to stick and stay together through good and bad times. A very special group of young men that I love so much. The seniors will be missed so much.”