Rice retires as chief of administrative services with SPS 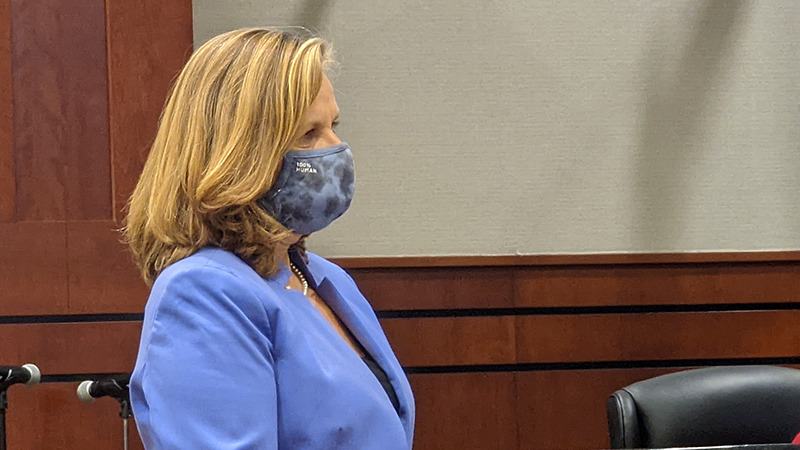 Dr. Suzanne Rice has retired as chief of administrative services of Suffolk Public Schools. Dr. Rodney Brown, who has been serving as human resources director, has been appointed to take Rice’s place.

Dr. Suzanne Rice had a long and distinguished career with Suffolk Public Schools, but the Dec. 9 School Board meeting was her last, as she will be retiring from her position as chief of administrative services. Dr. Rodney Brown, serving most recently as human resources director, has been appointed to assume Rice’s position.

Superintendent Dr. John B. Gordon III praised Rice as instrumental in his success, and while noting Brown has big shoes to fill, he impressed him during his interview and was ready for the opportunity.

“Whew, what a long, strange road it’s been,” Rice said after she was presented with a plaque honoring her service. “No, seriously, I’ve had an amazing journey with Suffolk Public Schools. … I will say this school division is second-to-none in my humble opinion, and it’s because we have so many incredible, talented educators, and by that I mean teachers, administrators, all the support staff, all of whom are so critical to our successes. And I know that under your leadership, Dr. Gordon, that the successes are going to continue. And they’re going to continue to grow.”

Rice said it has been an honor to work with and serve the SPS community.

“I think what is so special about Suzanne Rice is when the pandemic hit, when COVID started, and when I got the call and the text message stating that we were going to close schools before Gov. (Ralph) Northam made the announcement, my first call was to Suzanne Rice,” Gordon said. “And I said, ‘Dr. Rice’ — and her response was ‘Oh Lord’ — I said, ‘we have to create a task force.’ She said, ‘I’m already ahead of you,’ and within 15 minutes she had sent a spreadsheet of all the different things that we had to do.”

Gordon described Rice as his left hand and said she was deft in working through the issues of the pandemic while carrying out her other duties.

“Dr. Rice has like a hodge-podge of everything,” Gordon said, “and we wanted to streamline that process. From student services, school counselors, now social and emotional learning, emergency services that she works with, it’s just been everything. And there has not been a time that I haven’t texted or called Dr. Rice that she didn’t answer.” (Except when she was at a University of Virginia football game, he joked.) “We are truly, truly going to miss you.”

Rice started with SPS in 1987 as a teacher and taught at then-Southwestern Intermediate School and John F. Kennedy Middle School. She also taught in Accomack County Public Schools on Virginia’s Eastern Shore for three years.

She was also a principal at Oakland Elementary School for 10 years and a principal at King’s Fork High School for five years before she was named director of human resources in May 2013, replacing Leigh Bennett, who had retired.

She spent three years as director of human resources before being promoted to assistant superintendent for student services in May 2016, a position that at the time had been renamed from chief of operations after Douglas Dohey retired. Rice’s position title would later shift to chief of administrative services during fiscal year 2021 after Gordon became SPS superintendent in October 2019.

Rice earned her bachelor’s degree from Radford University, a master’s from Old Dominion University and a doctorate from the University of Virginia.

School Board members effusively praised Rice for her accomplishments and her humanity in their interactions with her. Tyron Riddick, in particular, recalled her being assistant principal at Elephant’s Fork Elementary School when he attended there and thanked her for her sternness and caring, and he eventually received his diploma from her as a graduate of King’s Fork.

Brown, who has a Bachelor of Arts and a master’s degree in special education from Norfolk State University and a doctorate in education from the College of William & Mary, had been the director of human resources in Southampton County before being named to the same position with SPS in June 2016.

“One of the things that stuck out to us so much in Dr. Brown’s interview was not only his institutional knowledge of the school division,” Gordon said, “but he had experience in doing this role in Southampton County Public Schools before he came to Suffolk.”

Gordon said he has confidence in Rice, but he and everyone who spoke acknowledged the big shoes he has to fill in taking over for Rice, including himself.

“It is an honor to follow … behind the great Dr. Suzanne Rice and continue to do the great work,” Brown said.

In introducing his family, he expressed pride in having his two daughters graduate from King’s Fork High School.

“I don’t say that to brag,” Brown said. “I say that to make the point that we’re invested in this community. We moved here over 20 years ago, and you guys did a great job. Team Suffolk has educated both of my children. I’m vested here, I’m a part of this community, I am this community. And we are doing great work.”