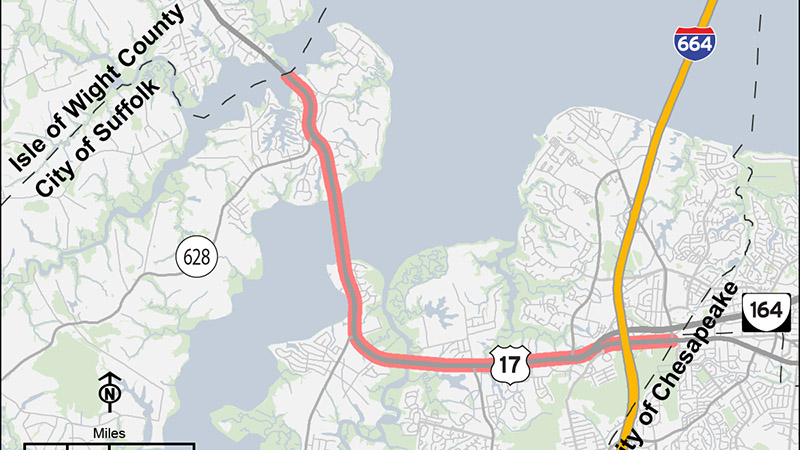 The study area is shown in red. (Submitted Image)

Can the Bridge Road/U.S. Route 17 corridor through Suffolk be made safer and keep drivers from experiencing backups without large-scale roadway widening?

The Virginia Department of Transportation wants to know, and it is surveying people to get feedback on recommendations to make travel smoother on a key 10.5-mile stretch of road through North Suffolk as part of the agency’s arterial preservation plan.

It is the second of three surveys looking at Route 17 travel conditions, this survey focused specifically on the area from College Drive to the Isle of Wight County line. The purpose of the plan is to preserve and enhance Route 17, and the goal of the study is to propose improvements that will help with safety issues, improve traffic and mitigate congestion.

The survey, open through Jan. 31, asks people to rate and prioritize proposed improvements. A separate survey for the portion of Route 17 in Isle of Wight will be issued in the spring.

Some proposed improvements in the survey include:

It also offers four long-term alternatives, and a short-term solution, for Harbour View Boulevard, including preliminary cost estimates, which do not include acquiring right-of-way.

A third alternative would create a center turn overpass — an elevated structure to manage all left-turns from Harbour View Boulevard and Route 17 to allow free-flow traffic to move on Route 17, costing $35 million to $39 million.

The final alternative would also involve a center turn overpass, but with the additional option for traffic on Harbour View Boulevard to enter the ramp onto I-664/Route 164, allowing the southbound Route 17 left-turn onto I-664/Route 164 at Town Point Road to be eliminated. That is estimated to cost between $40 million and $45 million.

Proposed improvements for College Drive include adding another southbound Route 17 left-turn lane to improve intersection operations by up to 30% with little to no impact, it says, on neighboring properties. A second alternative would also add another southbound Route 17 left-turn lane, but it would also reconfigure southbound College Drive to include triple left-turns and widening Route 17 that VDOT says would improve intersection operations by up to 45%.

A third alternative for College Drive would relocate the left turn on Lynn Drive through a quadrant road connecting to it. VDOT says that would improve intersection operations by up to 40% and cut down on queuing on Route 17 south.

The first survey took place in fall 2020. That was focused on people’s travel experiences between Isle of Wight and Suffolk. Those responses, according to the agency, were evaluated and aided in developing recommendations included in the current survey.

The Virginia Department of Transportation survey of U.S. Route 17 from College Drive to the Isle of Wight County line will be available until Jan. 31 at tinyurl.com/Rt17survey. Comments can also be submitted in writing to Jerry Pauley at 7511 Burbage Drive, Suffolk, VA 23435 or at jerry.pauley@vdot.virginia.gov. People are asked to reference “Route 17 Arterial Preservation Plan Study.”