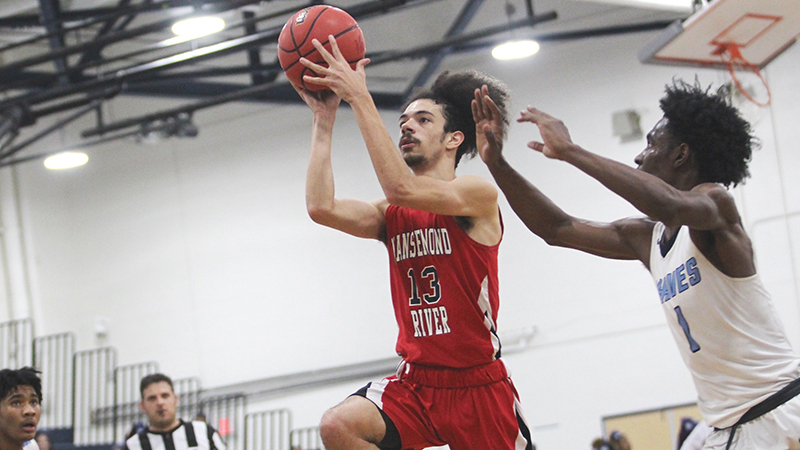 Between snow and COVID-19, Nansemond River’s boys basketball team has been unable to take the court frequently during the month of January. In fact, on the final Tuesday night of the month, the Warriors played their first road game in nearly six weeks, where they took on the 9-3 Indian River Braves.

It took nearly four minutes into the contest for either team to score. For much of the 32-minute affair, the battle proved to be back-and-forth, with neither one pulling away until the final period.

Indian River answered a strong third quarter from the visitors with a 16-0 run to gain separation. That proved to be too much for the Warriors, who fell 74-62 to drop to 5-5 overall on the campaign.

“The third quarter was the best quarter we played all year. We did everything asked out of us and even stuff I haven’t ever seen. Problem was the fourth quarter was maybe the worst we played all year,” NRHS head coach Ed Young lamented. “We only made two field goals, and you can’t do that against a team like this that’s physical and hitting outside shots.”

Trailing 13-9 after one quarter, Nansemond River settled in offensively behind senior guard Darrin Clark. His three-pointer with 5:23 to go in the half gave them a 19-17 lead. Yet, a lapse late in the first half found the Warriors trailing 29-21 at the break.

“The end of the second quarter where it was tied, we missed a shot we shouldn’t have taken and they went on an 8-0 run, that completely took the momentum from us,” Young said. “Against that team, I would’ve taken down two at half.”

In the third quarter, Nansemond River grooved things out as five different players scored a field goal. They shot 12-of-16 and hit their first seven shots from the field. Indian River’s C.J. Madison drained a three-pointer to put the Braves ahead 47-46 with two seconds left, only to be answered on a heave from beyond half-court by Mikael Sykes.

The 49-47 lead going into the fourth quarter would be short-lived for Nansemond River, which came up empty on nine straight possessions. Madison’s make late in the third quarter served as a precursor of the damage he’d do down the stretch, bunching 15 of his team-high 18 points after half-time with a game-best five three-pointers.

“The Madison kid was as good as anyone we’ve played all year. Every once in a while somebody else mixed a shot in there,” Young noted. “In certain situations, we just don’t play as well as we need to, but that was the total opposite in the third quarter. However, we showed some panic in the fourth quarter and had a hard time scoring along with some guys in foul trouble.”

With a host of games to be made up before the playoffs in February, the upcoming slate will be a busy one for a Warriors team trying to get healthier and stronger for the stretch run.

“We got three kids back that hadn’t practiced or played in almost 10 days. Saleem Williams, our second leading rebounder, has been out the last three games. He had missed three games earlier because of shin splints. As we told the kids, it’s the old saying of ‘next one up.’ We have a lot of inexperience, so we can’t go as deep into our bench as we’d like,” Young pointed out.

“Indian River’s a good team and I give them credit. We’ve got an NBA schedule with four games in five days, and now we’re going to find out what we’re made of. We just have to keep finding ourselves, stay in the hunt and see if we can sneak some wins here as we get moving.”