New Suffolk commonwealth’s attorney looking to make her mark with new initiatives, but don’t call her a progressive 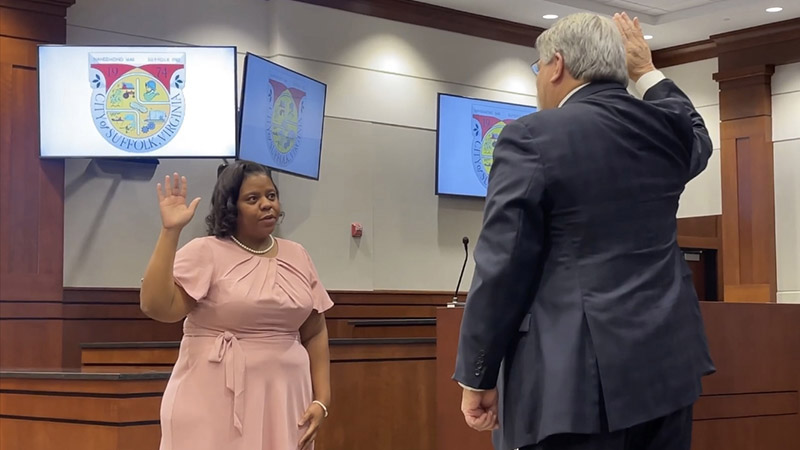 Narendra Pleas is looking to make her mark as Suffolk’s new Commonwealth’s Attorney.

Having been Suffolk’s commonwealth’s attorney for about seven weeks, Narendra Pleas has been putting her own stamp on the office and pushing for initiatives on which she campaigned, including establishing pretrial services, adding a mental health docket in the city’s courts and tackling environmental issues.

“Being able to put into place things that I felt our office was lacking or could be doing better, or trying to get those things in place — some of them have already taken place within the office, but then trying to move externally to what we do on a day-to-day basis as far as court is concerned — has been great to come back in that capacity to be able to lead the office.”

Pleas outlined the origin story of her working in commonwealth’s attorney’s offices, noting that while she was in law school at Indiana University in Indianapolis, she had won a scholarship sponsored by a local attorney and met with him. She recalled that he told her that whatever her first real job was out of law school would be where she would focus her career.

At the time, she felt he was joking, as she had told him her reason for wanting to come to the school was to study health law. However, her first job was as a prosecutor, and she has stuck with it.

“I like the thought of prosecution in that you do feel like you’re giving back to your community in some way, shape or form,” Pleas said, “that you perhaps are changing lives, hopefully, for the better, and that you have a sense that you’re helping to keep your community safe.”

She said part of the reason she wanted to run for commonwealth’s attorney was that “the way that we’ve done it in this country hasn’t always been the best.”

Pleas said she has met with the public defender’s office and the head of the Community Corrections Alternative Program to see what the city needs to do to get pretrial services up and running, as it is one of just three localities in Virginia, she said, that does not offer such a program. Everywhere else she had worked had pretrial services.

Typically, when someone is arrested, they are brought before a magistrate or court to determine bond, Pleas said, and a lot of people, especially in Suffolk, are not getting out because either they can’t afford to post bond, or the court is uncomfortable with releasing someone without some kind of supervision.

In a pretrial services program, Pleas said, someone who is arrested is released under supervision from the community corrections program within the respective city or county. The person would be released and monitored through the program to ensure they were going to work, remaining drug-free and not going anywhere they were ordered by the court not to go. She says the program has a high success rate and helps people who can otherwise not afford to post bond or who the court has some concern about releasing without supervision.

“It’s giving people opportunities to get out while their cases are pending,” Pleas said, “and hopefully go back to being productive because, what you have with most of these cases — and most of these cases are not our violent offenders, right? These are not our people who are committing murders or are people who have committing sexual assaults or robberies. We’re not talking about those individuals who we’re looking to get into pretrial services. We’re talking about those individuals who went and stole something from Walmart. It’s a different categorization.”

She said the lower court judges, especially those in General District Court, have also been supportive of adding a mental health docket. She said adding it will be dependent on cooperation and funding.

For murderers or serial rapists, she’s all in “with locking them up and throwing away the key,” but simply locking people up with mental health issues and not doing anything to prevent it is “contributing, in my opinion, to the problem.”

“We are looking to see where we can get that money from to get this running, hopefully within the next couple of years, if not sooner,” Pleas said.

Pleas has also been in contact with Pam King in the city fire marshal’s office to start dealing with environmental justice issues and putting together a prosecution plan. She has designated a prosecutor in the commonwealth’s attorney’s office to essentially be a liaison between Pleas’ office and the fire department, and that person will be responsible for prosecuting those kinds of crimes.

She also wants to add mentorship programs with the city’s youth and perhaps add a peer court-type system in schools that would take cases that would otherwise be tracked to come to court and have kids trained in mediation and deal with the issues in their school.

“I think that when you’re accountable to the people around you, and the people around you are the ones making those decisions, your behavior is more likely to change as opposed to you coming to this building,” Pleas said, referring to the Mills E. Godwin Courts Complex.

Her office has also begun what she calls the Love Suffolk Initiative, in which members of her staff go out in the community as volunteers in community service projects.

Pleas said having worked in Suffolk for eight years previously has helped in her transition to being commonwealth’s attorney, and despite the initiatives she’s working on, she does not consider herself a progressive prosecutor. She just believes that other localities have been moving forward at a faster pace than in Suffolk, and she wants to change that.

“The nature of the job has changed,” Pleas said. “If you commit crimes, my office is here to prosecute. But we’re just trying to do it in a smarter, more efficient way that has a better outcome for the entire community. …

“I’m not a progressive prosecutor. Please don’t label me as such. But I do think we should be forward-thinking, and whereas Norfolk has, and other cities are doing things to move ahead, I’m just trying to catch Suffolk up just based on the fact that we were behind. Like I said, pretrial services are all around us. Why are we the ones that don’t have it and all of these other things are just moving forward? And so again, it does sound progressive, but I’m not progressive. I’m just realistic and logical.”