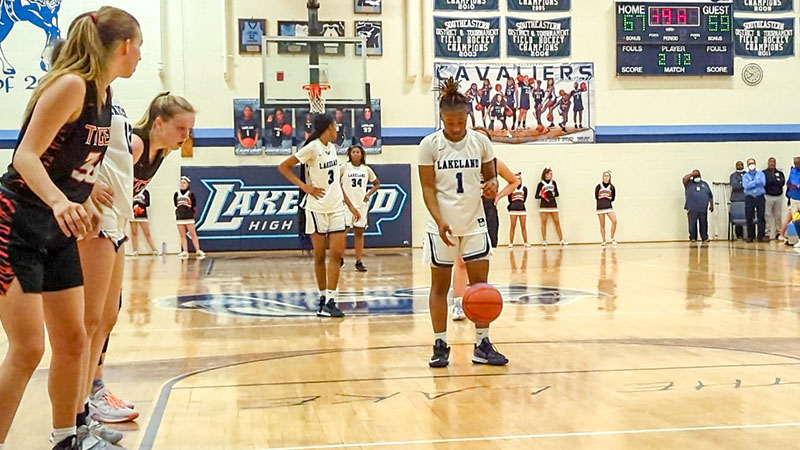 Lakeland’s girls basketball team overcame a slow start to the season to make a strong run through the latter half of the season and in the playoffs.

But the Cavaliers could not overcome a slow start in the Class 3 state semifinal, falling behind by 20 points in the first quarter on their way to a 65-33 loss in Falls Church to Meridian Monday.

After the Cavaliers’ Jamauri Demeil scored the first basket of the game, Meridian finished the first quarter scoring the next 22 points, as they had nine turnovers and sent the Mustangs to the free-throw line on numerous occasions in the first eight minutes.

“Take nothing from them, they’re a great team,” said Lakeland coach Daryl Rountree said. “Our first quarter put us in a hole. If we’d have had a good first quarter, we would have had a chance.”

Lakeland regrouped in the second quarter, changing up its defense in outscoring the Mustangs 8-7, but it still trailed 29-10 at intermission, having scored just three baskets. Meridian stretched its lead to 42-16 after the third quarter, and though the Cavaliers had their best-scoring quarter of the game in the final eight minutes, they had dug themselves too deep a hole.

“Once you get into a hole like that, you put a whole lot of effort on the defensive end trying to stop them and we could get no offense going.”

After starting the season 4-4, Lakeland won 11 of its next 12 games, and its last five, before falling to the Mustangs. Those last five included dominating postseason wins against Colonial Heights and Southampton, along with victories against Lake Taylor, New Kent and, last Friday in the state quarterfinals, to Brentsville District.
“When I look back, I’ll look back on how we started out slow, but they had enough character to know that we could do better,” Rountree said. “And they stepped up to the challenge and we got on a winning streak again – (six) in a row. They were a great team, they were a close-knit team. They were able to put themselves together and make it happen for them.”