A cinder block and brick no more 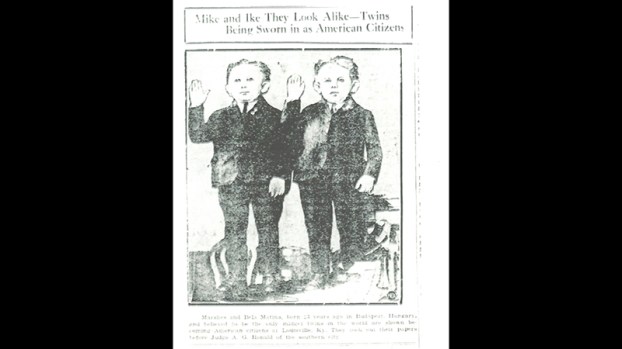 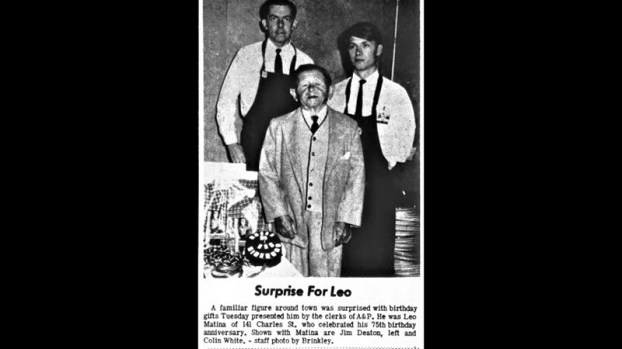 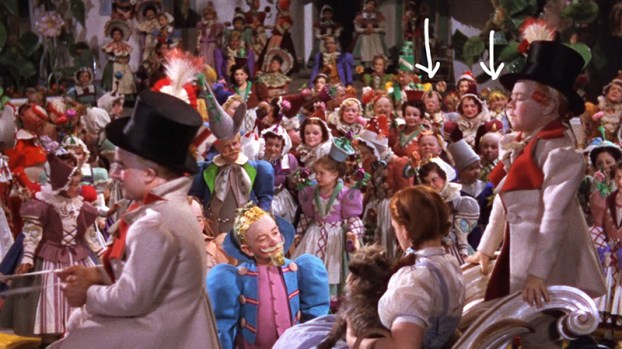 A still frame from “The Wizard of Oz” with arrows pointing to where Suffolk resident and “Oz” aficionado Peggi Parker-Butler believes Ike and Mike Matina are. 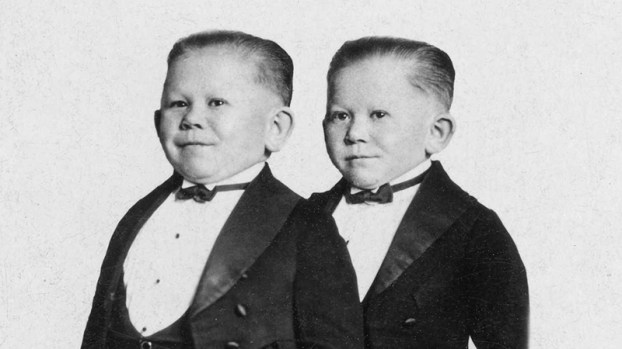 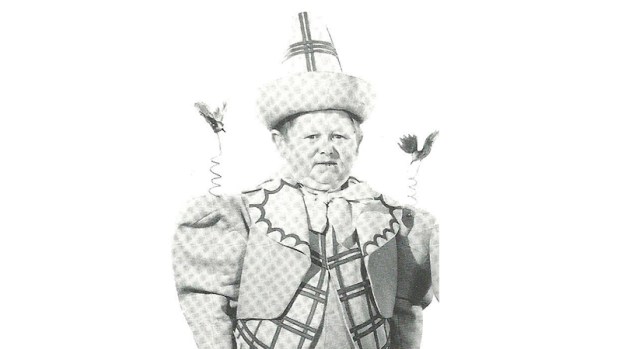 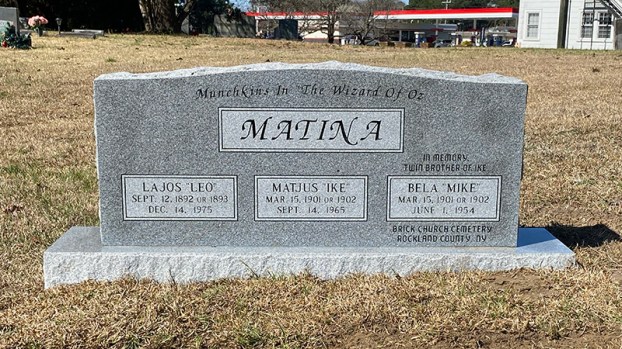 In a photo courtesy of Blake Baker, a headstone for the Matina brothers, who played Munchkins in “The Wizard of Oz.” It was placed Friday at Bethlehem Christian Church Cemetery. 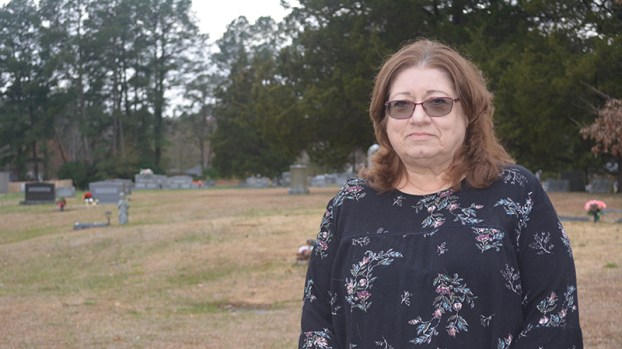 Parker-Butler pictured this week near the Bethlehem Christian Church Cemetery graves of Ike and Leo Matina.

‘Oz’ actors’ graves to be marked in ceremony

Peggi Parker-Butler has been fascinated with the movie “The Wizard of Oz” for as long as she can remember.

Her home is filled with hundreds of pieces of memorabilia from the movie, including a Christmas tree that stays up year-round, adorned with ornaments featuring the movie’s characters.

But much like Dorothy’s realization through hardship that home was closer than it seemed, it took a couple of personal tragedies for Parker-Butler to learn how close to home some parts of her favorite movie’s history really were.

The lifelong Suffolk resident was mourning longtime friend Kathy Aston Parker in September 2017. “She was the second-longest friend I’ve ever had,” Parker-Butler recalled. “When it’s a friend that you have known basically your entire life, it’s a deep hurt.”

Kathy was buried in Bethlehem Christian Church Cemetery. After the service, Kathy’s sister came up to Parker-Butler and uttered a mysterious line that would send Parker-Butler on a years-long research journey.

“She said, ‘Peggi, I know you collect Oz stuff.’” The woman went on to tell her that Charles Parr, whose funeral home was handling the service, had mentioned in passing that week that there were some men who played Munchkins in “The Wizard of Oz” buried in that cemetery.

Parker-Butler filed the information away in her mind and, later at home, flipped through some of her books about the iconic 1939 film. However, without knowing the names of the actors, her search was fruitless.

In 2019, Parker-Butler’s own mother passed away. Once again, Parr Funeral Home handled the service. When they were done making arrangements, Parker-Butler asked Charles Parr offhandedly about the actors.

Years ago, Parr bought I.O. Hill Funeral Home and acquired all of its records. Parr told her he would make copies and send them to her.

But there was one more part that really intrigued Parker-Butler. Parr mentioned the actors were buried in unmarked graves.

“Nobody should be in an unmarked grave,” she said. “I said, ‘I’ve got to do something about this.’”

Charles Parr confirmed he had told Parker-Butler about the men’s graves and provided the burial records that finally gave her names to research.

On information from Parr, Parker-Butler later visited Bethlehem Christian Church Cemetery and looked for the graves. He had said they were adjacent to each other — one marked by a cinder block, the other marked by a brick.

“My husband and I went out to the cemetery, and there it was,” she said. “It was near my friend.”

Parker-Butler soon dedicated herself to researching the actors, a journey to rival Dorothy’s. Her research has taken her — digitally speaking — from Suffolk, Virginia, to the similarly named town of Suffern, New York, and all the way across the Atlantic to Hungary.

The Matina siblings were born in Hungary to a tailor, John Matina, and his wife, Maria. Twins Bela and Matjus, who came to be known as Mike and Ike, respectively, were born on March 15. Some sources say 1901, and some say 1902. They had an older brother, Lajos, who came to be known as Leo, who was born Sept. 12, 1892, or 1893. They also had other siblings, Ellan, Johan and Albert, some of whom were little people and some who were not.

Reportedly, the three got their start in show business when the twins were 12 years old. Carl Shaffer, a German showman, was traveling through Budapest, Hungary, according to the rare book “Life of Mike and Ike: Only Twin Midgets in the World.” Shaffer heard about the family and offered to take three of the boys and train them for show business.

It was understood that he was not to take them out of that part of the country, but the troupe soon was traveling the world — into all parts of Europe and even to Australia, China, the Philippines and eventually to the United States.

The Matina brothers joined the Phylises Circus in Texas, then in 1916 joined the Johnny Jones exposition shows in Florida, according to the book “Life of Mike and Ike,” which it’s believed was sold at shows as a souvenir. Only one copy remains known in existence, and Parker-Butler was able to acquire pictures of its pages from the owner during her research.

It was with the Jones show that the twins were given the nicknames of Mike and Ike.

(The twins are just one of several of the urban legends surrounding the etymology of the name of Mike & Ike candy. The candy company JustBorn states on its website that the true origin of the name of its fruity, colorful boxed confection, which has been manufactured since 1940, “remains a mystery.”)

In 1917, the twins, recorded in the book as 32 inches tall, joined the Ringling Brothers Circus, performing at such notable venues as Madison Square Garden, and also sold war bonds on Broadway in soldiers’ uniforms.

In 1936, the three brothers were chosen by Walt Disney Studios to be the models for “Doc,” “Grumpy” and “Happy” in “Snow White and the Seven Dwarfs.” In 1938, they were among the little people, joined by some children, who played the Munchkins in “The Wizard of Oz.”

They took a chartered bus labeled, on the side, “We are the Little People of Munchkinland on our way to Metro-Goldwyn-Mayers (sic) Studios, Hollywood, California, to Appear as the Little Stars (of) The Wizard of Oz,” according to photos captured at the time.

Along with their co-stars, the Matina brothers worked for eight weeks to record the Munchkinland segment. The trio didn’t have any of the speaking roles among the Munchkins; in fact, the vast majority of the Munchkins’ speaking roles were dubbed. They were instead among the crowd, and Parker-Butler has spent hours scrutinizing paused still frames of the film hoping to spot them. She thinks she has found them.

“I think they’re at the very, very end of Munchkinland when Dorothy is skipping out,” Parker-Butler said.

In 1943, the brothers joined Virginia Greater Shows, which usually spent the offseason in Suffolk, making them Suffolkians. They lived on Charles Street.

The brothers were popular figures around town. Mike and Ike would portray Santa’s helpers in a local store window during the Christmas season. Leo was a chef and children’s ride supervisor with the carnival and took the role of Santa Claus, once again teaming up with his twin brothers to delight younger audiences. They had a photo op in the Suffolk News-Herald on March 3, 1949, with Gilbert Reichert, a man more than 8 feet in height, on the front steps of the old post office. Leo Matina was given a surprise birthday party at the A&P grocery store on his 75th birthday in 1967, an occasion also memorialized with a photo in the Suffolk News-Herald.

The first of the brothers to pass away — and the only one of the three not buried at Bethlehem Church — was Mike. He was on tour in Suffern, New York, when a Virginia Greater Shows truck overturned in a collision with a car driven by a local man. He died June 1, 1954, at the Good Samaritan Hospital and was buried at the Brick Church Cemetery in New Hempstead.

Records from I.O. Hill & Company and obituaries from the Suffolk News-Herald confirm Ike and Leo are buried at Bethlehem Christian Church Cemetery.

For several years, Parker-Butler has meticulously researched the lives of the Matina brothers, constantly thinking of different ways she can track down information.

“These three men are creeping into my head,” she said. “Things come to me about 3 o’clock in the morning. And I just wake up in bed, and sometimes I’ll even get up and make a note of something. It’s like somebody is telling me, ‘Look this up.’”

At long last, Parker-Butler’s dream and years of research will come to fruition soon. All are invited to a ceremony taking place at 11 a.m. April 2 at Bethlehem Christian Church, 1549 Holland Road, as a celebration of life. Leo’s and Ike’s grave will finally be marked with a headstone that also honors their brother Mike.

Parker-Butler will say a few words during the service, which will be led by Bethlehem Christian Church Pastor Rob Slingluff.

The headstone was donated by R.W. Baker & Co. Funeral Home.

“I just thought it would be neat to have them recognized,” said Blake Baker of Baker Funeral Home. “An unmarked grave is not a good thing.”

And though the headstone won’t be in her home, it will be perhaps the most lasting memory of Parker-Butler’s fascination with “The Wizard of Oz.”

“They’re finally going to be recognized,” she said. “I do feel like I was chosen to do this. Between being a lover of all things Oz and my friendship with Kathy, it was meant to be.”