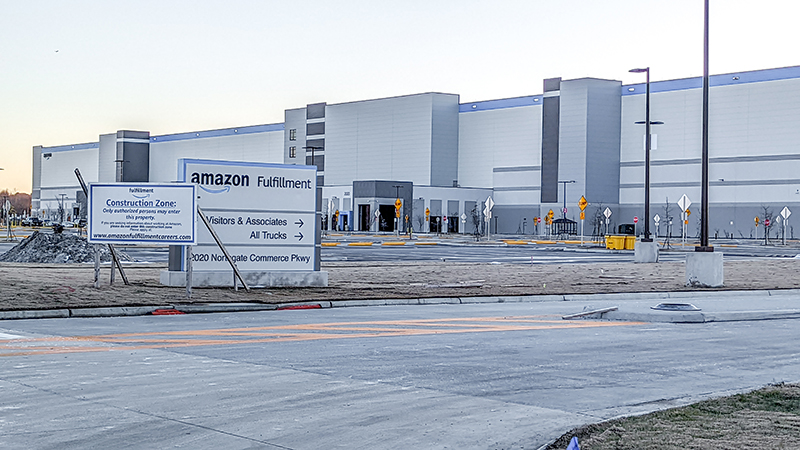 The 3.8-million-square-foot Amazon robotics fulfillment center that will open later this year in Northgate Commerce Park will give the city the third-largest industrial completion in the United States. About 5-million-square-feet of industrial space is expected to open over the course of the year.

Suffolk will have the third-largest industrial completion in the nation this year when the 3.8-million-square-foot Amazon robotics fulfillment center opens soon in Northgate Commerce Park, according to Commercial Search’s Industrial Pipeline Report.

The facility is about 76% of the 5 million square feet of industrial space expected to open in the city in 2022.

“In order to support this substantial facility in Suffolk, a tremendous amount of visioning and planning has taken place over the years by City Council members, Economic Development Authority members and city staff,” said Deputy City Manager Kevin Hughes in a statement. “I can’t say that we anticipated a 90-foot tall and 3,800,000-square-foot facility being built during our years of planning and preparation, but it is rewarding to know that the efforts by many allowed us to be able (to) accommodate it.”

Amazon’s $230 million robotics fulfillment center, which will employ about 1,000 people, will be the second-largest building in Virginia after the Pentagon, and the largest industrial building in the state.

Nationally, up to 592.5 million square feet of industrial space is currently under construction, according to Commercial Search.

The report also ranked the 20 U.S. industrial markets with the most industrial space currently under construction as it looked at what areas of the country are seeing the most development. Dallas, Phoenix and Indianapolis topped that list.

Giga Texas, owned by Tesla and operating out of Austin, Texas, is expected to have the largest industrial completion of 2022 with 4.28 million square feet of industrial space, followed by a 3.8-million-square-foot Amazon distribution center in Detroit.

The Tesla opening is scheduled for Thursday and is expected to have 15,000 people on hand, according to the report.

Seven of the top 10 industrial projects scheduled to come online in the U.S. this year are Amazon-related.

Only one other distribution center in the top 10 is not owned by Amazon — Walmart’s 2.77-million-square-foot facility in Ridgeville, South Carolina. In 2021, the 10 largest industrial completions were all warehouses owned or leased by Amazon.

But Suffolk is likely not done with large fulfillment centers.

City Council on Wednesday is expected to take up a resolution to request an economic development access program allocation from the Commonwealth Transportation Board for a 1.5-million-square-foot distribution center, known currently as Project Coastal, from an unnamed Fortune 50 retailer, to be located off of Enterprise Drive along U.S. Route 58 in the Virginia Port Logistics Park. The Fortune 50 represents the 50 largest companies in the U.S.

The project would “provide for new private capital investment in land, building and distribution equipment which will provide substantial employment,” according to the draft resolution before council.

According to documents in council’s agenda package, the city has been shortlisted as the potential location for a new import warehousing distribution operation in the Virginia Port Logistics Center.

But because the site lacks proper road access, the company would need help in building the road to provide for the proposed distribution center, and the program is designed to provide the financial help to attract new businesses.

Target already has a 1.8-million-square-foot distribution center in the city off of Manning Bridge Road and Route 58 in the Westport Commerce Park. It opened in 2003.

Other sites are seeing development, including the Portside Logistics Center in North Suffolk, the Coastal Logistics Center off the Route 58 Bypass and Carolina Road, the Westport Commerce Park off Route 58 and Manning Bridge Road and the Virginia Distribution Center off Benton Road.

‘Fast and furious’ time for police chief since interim…