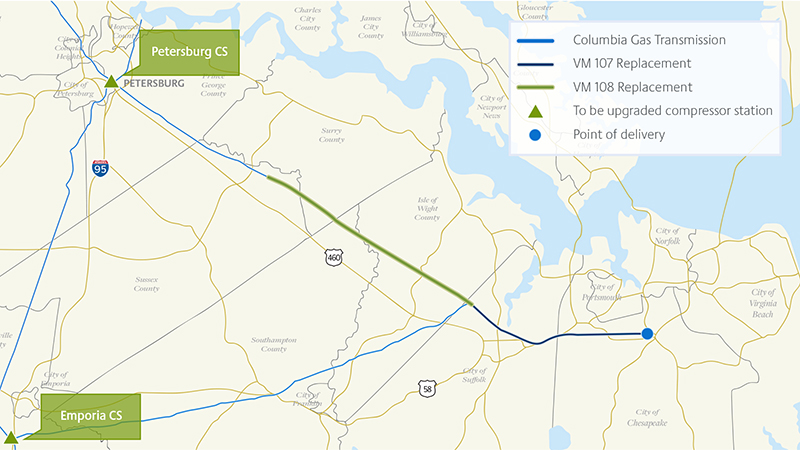 In green and dark blue are the two legs of the pipeline that will be replaced and expanded. The new segments will connect to existing pipelines, in light blue, and to compressor stations outside Petersburg and Emporia.

The Federal Energy Regulatory Commission is seeking public input on the environmental impacts of a proposed natural gas pipeline expansion in southeastern Virginia.

Columbia Gas Transmission LLC, a subsidiary of Canada-based TC Energy unaffiliated with Columbia Gas of Virginia, is seeking federal approval for what the company has termed its “Virginia Reliability Project.” The project entails replacing an existing 1950s-era 12-inch pipeline that passes through the city of Suffolk and Isle of Wight, Surry and Southampton counties with a 24-inch one to meet growing demand for natural gas across the Hampton Roads region.

The expanded pipeline would connect to existing segments in Prince George and Greensville counties, and to the company’s Petersburg and Emporia compressor stations. According to the company’s website, the project is expected to generate a one-time increase of $7.7 million in local tax revenue.

If approved, construction of the pipeline would begin in mid-2024 and be operational by November 2025. It would deliver an additional 100,000 dekatherms per day, a measure of the heating value of 1,000 standard cubic feet of natural gas.

“Enhancing the system to meet existing and growing needs will create significant positive economic impacts across the region to offset the more than $4 billion lost in economic growth over the last five years due to a shortage of available natural gas supply,” states a company fact sheet.

A March 16 press release from the Sierra Club’s Virginia chapter, however, contends there’s “no shortage of natural gas in Hampton Roads” and that the communities the pipeline would pass through are already experiencing “an overburden of existing fossil fuel infrastructure.”

The proposed project would take a different path through the area than the controversial Atlantic Coast Pipeline Dominion Energy and North Carolina-based Duke Energy proposed in 2014 and scrapped in 2020. The TC Energy pipeline will connect to Suffolk in the vicinity of the Western Branch Reservoir, and run near U.S. Route 58. The ACP would have run through the southwestern areas of Suffolk near the city’s Holland community, and would also have run near U.S. Route 58 slightly north of the proposed TC Energy route.

FERC issued notices on Feb. 22 and March 7 soliciting comments on any environmental issues pertaining to the proposed pipeline, and will compile the public’s input into a document which will inform its decision-making process to determine whether the project is in the “public convenience and necessity.”

Much like the state-level “certificate of public need” process Riverside Health Systems recently went through to secure permission to build a 50-bed hospital in Isle of Wight County, the federal Natural Gas Act requires natural gas companies to obtain a “certificate of public convenience and necessity” from FERC before they’re allowed to build new pipelines or expand existing ones.

The public has until 5 p.m. April 6 to provide such input by submitting an eComment or eFiling at www.ferc.gov/ferc-online/overview. For eFilings, users must have or create an eRegistration account.

The public also has the option of submitting comments on paper, referencing docket number PF22-3-000.