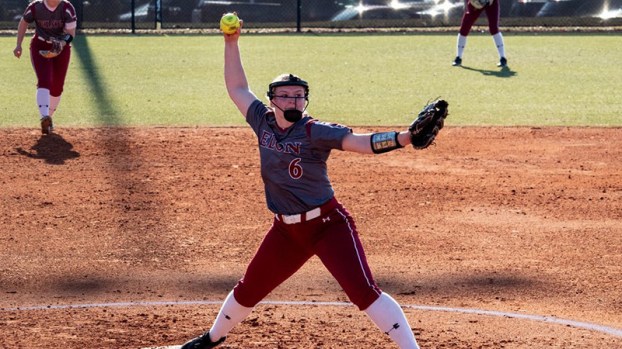 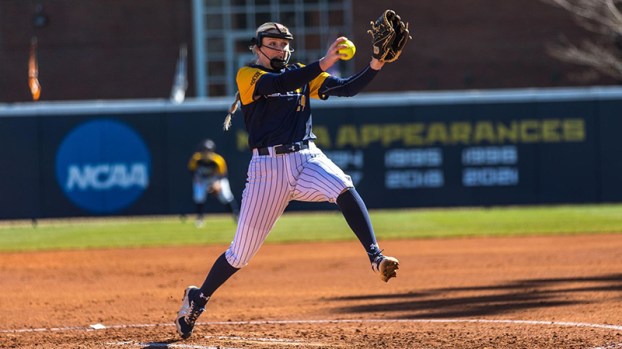 Taylor Cherry and Reese Byrd have competed competitively against each other in softball since they were 4 years old. Now, they compete at the collegiate level, too.

On March 6, Cherry threw the third perfect game in Elon softball history during the team’s 1-0 victory over East Carolina University. Seven days later and 19 miles away, Byrd threw a five-inning no-hitter in an 8-0 home win over Delaware State University — the 13th no-hitter in UNC Greensboro’s history.

Byrd texted Cherry after she learned of her perfect game and told Cherry that her accomplishment inspired her to achieve her no-hitter.

“Her doing that kind of motivated me to throw better because it’s always been this friendly competition between us,” Byrd said.

After Cherry struck out the final batter on March 6 against ECU, her teammates rushed out to the pitching circle as the crowd celebrated the historic achievement she accomplished.

“I got chills,” Cherry said. “All the girls running up to me and congratulating me brought tears to my eyes.”

By allowing no hits or walks, Cherry threw the third perfect game in program history — the second by a freshman. It was only her seventh college start.

While Cherry knew she was close to a historic accomplishment during her perfect game, she said her teammates made an effort not to jinx it.

“I knew around the fifth inning, I was like, ‘I can actually do this,’” Cherry said. “Nobody said anything until the end of the game.”

Cherry struck out 10 of the 21 batters she faced but relied on her teammates to make plays in the field to secure the other 11 outs.

“It’s definitely a blessing for sure,” Cherry said. “I couldn’t have done it without the teammates and coaches and my family, of course.”

Elon head coach Kathy Bocock has been a part of all three perfect games in the program’s history. For her, being a part of a perfect game is special and she was happy to see Cherry accomplish the feat so early on in her college career.

“She wants to make a difference in this Elon softball program and help this team,” Bocock said. “She’s very confident.”

While Cherry realized in the moment she was in the midst of a perfect game, Byrd had no idea she had thrown a no-hitter until her teammates ran up to her after the game.

“Toward the end of the game, I was just kind of focusing on not letting them score,” Byrd said. “A few of them told me after the game, they were like, ‘I knew it was happening. I knew it in the fifth inning, but I was like, ‘Nobody say anything. Don’t jinx this.’”

Byrd said not knowing she was working toward a no-hitter helped her remain calm, especially as the game drew closer to an end.

“If I would have known, I would’ve been a little more tight,” she said. “It for sure helped me. And I’m glad none of them told me during.”

Gabe Rogers coached Cherry at Nansemond River High School, a school of over 1,500 students. Cherry was a member of Nansemond River’s 2021 state championship team, which won the school’s first state title. Rogers received a text from Cherry’s father after she threw her perfect game.

“It’s one of those things that you’re surprised when you hear it, but when you know the kid, you’re not really that surprised that she had that capability to do it,” Rogers said. “We always knew we had a special player when she was with us.”

Byrd played high school softball at Nansemond-Suffolk Academy, a private school with just over half the enrollment of Nansemond River. Their schools were in different leagues, so Byrd and Cherry rarely played against each other in games, but Rogers said Byrd always impressed him when their teams scrimmaged against each other.

“She’s very skilled, she’s very talented,” Rogers said. “My players are always excited to be able to play against the best in our area, and she was one of the best.”

According to Rogers, Virginia typically does not send as many softball players to Division I schools compared to some of the traditional recruiting hotbeds, such as California, Florida and Georgia. However, he said Virginia is beginning to produce higher-quality players, and Suffolk specifically has become more competitive in recent years.

“The level of softball is starting to get a little bit better,” Rogers said. “It’s always nice when players from this area come in and perform like they did and can kind of show everybody else, ‘Hey, we’ve got some quality ball players in the state of Virginia as well.’”

Byrd hopes that by playing softball at an out-of-state Division I school, she will inspire other players from the area. She believes she and Cherry can succeed in showing how strong Suffolk softball programs are.