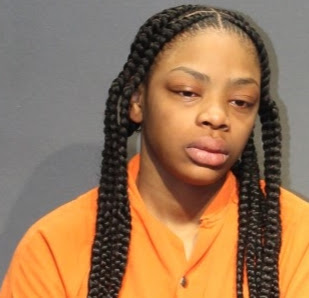 Ti’keria Imonie Wilson, 18, faces multiple felony and misdemeanor charges, including malicious injury of a police officer after Suffolk Police said she bit an officer and tried to bite another while they were trying to detain her. Submitted photo.

A Suffolk woman was arrested Sunday after police said she bit an officer and attempted to bite another while they were trying to detain her.

Suffolk Police arrested Ti’keria Imonie Wilson, 18, who faces felony charges of malicious injury of a police officer, assault and battery of a police officer or firefighter, and three misdemeanor charges of resisting arrest and obstructing justice by threats or force, and misdemeanor charges of identity theft: use or avoid arrest or impede an investigation, disorderly conduct, curse and abuse and interfering with a city officer.

Officers responded to a report of a person with a knife in the 200 block of Culloden Street allegedly threatening others inside the home at that location. When they arrived, officers found the suspect and began to detain her. While doing so, police said she bit one officer and tried to bite another.

A hearing for Wilson, currently in custody at the Western Tidewater Regional Jail, is scheduled for 10 a.m. June 7 in Suffolk General District Court.