Seaboard Coastline Trail to get money to expand 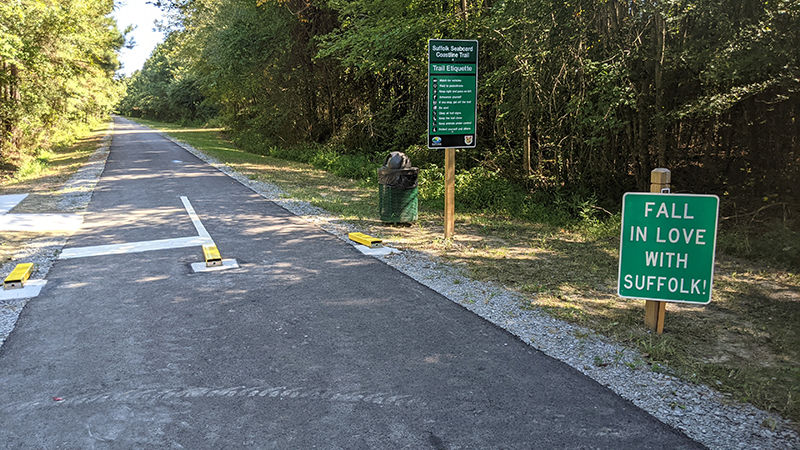 Suffolk will receive $530,177 from the Hampton Roads Transportation Planning Organization’s transportation alternatives set-aside program to go toward Segment III-B of the Seaboard Coastline Trail, which extends from the endpoint of Segment II at Nansemond Parkway to Nansemond River High School.

Suffolk will receive $530,177 to add to its Seaboard Coastline Trail as part of more than $5.7 million in funding from a regional group’s transportation alternatives set-aside program.

The city will receive the money for Segment III-B of the trail, which will extend from an endpoint of Segment II at Nansemond Parkway to Nansemond River High School, and it will be allocated for fiscal 2023 and 2024. The total cost of the project is $2.27 million.

Most recently, the city last May opened a 1.5-mile paved segment of the trail from Suburban Drive to Nansemond Parkway and held a ceremony in September to mark its completion.

The 10-foot wide, Americans with Disabilities Act-accessible Segment II of the trail will connect different parts of the city from the Seaboard Station Railroad Museum in the central part of the city to Driver in the north as part of its 11.1-mile trail network, of which about five miles have been built. Most of Segment II’s almost $1 million cost was paid for through grant money the city received. City officials have said other segments will be paid for in a similar manner.

The northern 3.5-mile Segment IV, which runs from Driver to Pughsville and the Chesapeake city line near Interstate 664, opened in 2015.

The city’s trails will eventually link up with the Western Branch Chesapeake trail and be a part of the 41-mile South Hampton Roads Trail, which runs from the railway museum to the Virginia Beach oceanfront.

The South Hampton Roads Trail is envisioned to eventually be a part of the roughly 190-mile Birthplace of America Trail, linking it to the already-completed 51.7-mile Virginia Capital Trail that goes from Richmond in the north, into Henrico County, Charles City County and James City County in the Jamestown area.

Parks and Recreation Director Mark Furlo said last September that the city has plans to take the trail west toward Lakeland High School.

The transportation planning organization’s staff coordinates with the Virginia Department of Transportation’s Hampton Roads District and local assistance division staff, Hampton Roads localities and agencies, the Commonwealth Transportation Board district representative and other stakeholders to determine what projects are picked.

In Virginia, district CTB members get $1 million per year, and $2 million per two-year funding cycle, in set-aside money to allocate for projects in their districts. Coupled with the more than $3.7 million approved by the transportation planning organization’s board at its March 17 meeting, the money will go to eight projects in the Hampton Roads region, including the ones in Suffolk and Chesapeake.

Pedestrian and bicycle facilities such as the Seaboard Coastline Trail are among the eligible activities for the set-aside program.

Chesapeake also received $582,944 for one phase of its project and $406,460 for another that will connect to Suffolk’s Seaboard Coastline Trail in North Suffolk. Both projects will cost about $3.6 million.