Orange and Blue, more direct bus routes proposed for you 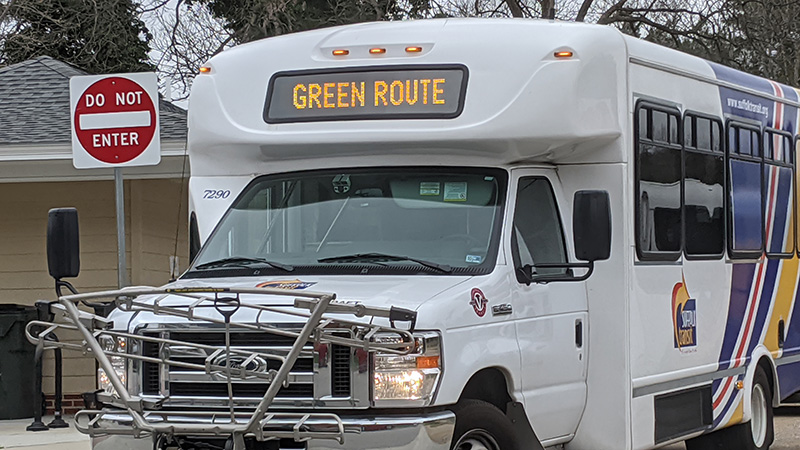 Suffolk Transit could have more new routes by July 2023, according to its manager, Maria Ptakowski. It wants to split up one of its most-used and heavy residential routes that stretches from Magnolia Gardens off of Prospect Road near Portsmouth Boulevard, to Carolina Road into two routes to reduce overcrowding and make them more reliable.

Suffolk Transit could have more new routes in a little more than a year, its transit manager told City Council during a recent briefing.

Maria Ptakowski, who has been with Suffolk Transit since its inception about 10½ years ago, said it wants to alter its Orange Route, one of its most-used residential routes and one that currently crosses railroad tracks nine times per trip for the 12 hours per day it is operational.

The new Orange Route would continue to serve the Downtown Transfer Station, the West Jericho neighborhood, the Portsmouth Boulevard Food Lion and Magnolia Gardens, and on the western part of the route, it would serve Factory Street and Carolina Road. Ptakowski said the new route would go up and down East Washington Street four different times per day.

However, it splits up some of the more residential parts of the current route to create a new Blue Route that would serve neighborhoods south of East Washington Street, also servicing Carolina Road and Culloden Street near the city’s Department of Social Services building. She said both routes will be more direct.

“We’re covering the same area, but we’re now making it easier to get on the bus by going bi-directionally and we’re going to help with some of that overcrowding that happens on that Orange Route,” Ptakowski told council members, “and making it more reliable with time because we’re going to cut down all the train tracks that happen in that one particular route and it’ll break up always having to meet the other buses at the transfer station.”

Saturday service would also be extended to the Red Route, which starts at the Downtown Transfer Station and goes downtown to Finney Avenue and Pinner Street, on Portsmouth Boulevard to the Magnolia Park and Ride, and on North Main Street and Pruden Boulevard as far as the College and Career Academy at Pruden. Currently, other routes serve the Red Route areas on weekends.

By July 2025, a new commuter bus route will provide service between Suffolk’s industrial park area and Portsmouth’s Victory Crossing, a hub for Hampton Roads Transit, which serves the wider Hampton Roads region. Virginia Department of Transportation SmartScale funding has been approved for the new bus route in fiscal year 2026. Two new buses will be used to provide this service and will be wheelchair-accessible.

“I think it’s a great thing to be able to do that,” said Vice Mayor Leroy Bennett, who also suggested putting a crosswalk at the Suburban Drive stop.

A proposed Suffolk-to-Windsor bus route would provide service from the Downtown Transfer Station to the Windsor public library, with stops at Sentara Obici Hospital and the Shirley T. Holland Industrial Park in Isle of Wight County. The county and city would jointly apply for SmartScale money for it.

“This will allow us to create … more of a connection between some of these outlying areas that the city of Suffolk is very close to that a lot of people are trying to go to and from,” Ptakowski said.

Suffolk Transit is in the early stages of looking at what the transportation needs are in villages such as Chuckatuck and Holland.

“We’re going to make sure that when we create an on-demand zone, which will be a scheduled ride that’ll take you from point A to point B,” Ptakowski said, “that we’re going to create it in the correct areas and make sure that we’re taking them to the correct destinations. We don’t want to create a system and then it doesn’t actually help anybody.”

A public hearing would be needed before any changes could be made.

It has plans to add a bench and trash can to its Suburban Drive and Portsmouth Road stop, and it has plans for similar improvements at its stops at Dill Road and Nancy Drive, Holland Road, Holly Lawn Parkway, Main Street Marketplace and Respass Beach and Burbage Circle.

It also has begun looking to add a concrete pad and bench at its stop at Nansemond River High School.

“I want more shelters in those areas,” said Councilman Donald Goldberg, “not just pads, but more shelters. People have to wait, and it’s raining and what have you, they need to be covered.”

Councilman LeOtis Williams asked how soon could a Sunday route be implemented following the current survey, which ends May 28. He suggested that if the survey indicated a demand for Sunday service, the city could find the money to make it happen.

Ptakowski, in explaining the steps needed for a Sunday route, said it could take a year or more and would be largely dependent on funding and designing a route, but Suffolk Transit will take the survey results into account.

“That would be what we’d call a major service change,” Ptakowski said, “because it would be an addition of an entirely new day, so we’d have to do a public hearing. It would take a little bit of time. We’d have to post that for at least 30 days. If we were to do something like that, I can’t promise it would happen as fast as I may want it to, just because of funding reasons, but ideally, we like to make a lot of our changes all at the same time, and so we could do it with that FY ‘24 set of changes.

“If funding is available, it’s always possible we could do it before that, but it would take a little bit (of time) because we’d have to figure out the best way to design the route too to make sure we’re doing all the service that needs to happen on a Sunday. FY ’24 would be the latest that I would try to attempt that.”