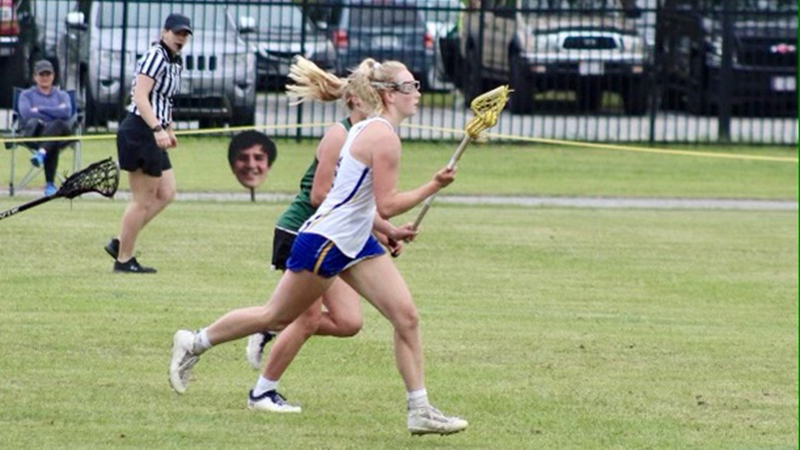 Marlin Price has been playing lacrosse since she was in the 2nd grade and is the leading scorer for the girls' lacrosse team at Nansemond-Suffolk Academy.

Marlin Price, a senior lacrosse player at Nansemond-Suffolk Academy, had already reached the 100-point plateau in late March. On May 8, she reached another by scoring her 100th goal in a game against St. Gertrude.

Friends who played the game introduced her to it in the second grade, and in lacrosse, she found a sport that gave her community on and off the field.

“I think lacrosse is a really thrilling sport,” Marlin said. “It’s very rewarding seeing my teammates and myself work together to succeed. The teamwork drives me.”

She also credits lacrosse with skills that go beyond the sport. She explained that, as a midfielder, she is constantly adjusting her gameplay to what is required at that moment.

“Midfielders are put in different positions and have to adjust, whether it’s on offense or defense, just fighting for that ground ball,” Marlin said. “I think that inspires me in my day-to-day life to keep going and work hard. It pays off to work hard and see the results.”

In addition to lacrosse, Marlin competes in indoor track and plays volleyball. She was an all-state selection for NSA’s state champion volleyball team last season.

In order to keep up with her academics and sports, Marlin maintains a strict schedule and proper time management.

“I keep a schedule where I get everything done in a certain amount of time,” she said, “and seasons where I wasn’t playing sports it was actually harder. The routine helps me academically.”

As Marlin is wrapping up her high school lacrosse career, her younger sister, Haley, is just getting started. Marlin and Haley play together, and Haley is the team’s second leading scorer as a freshman.

“We work so well together,” Marlin said. “She’s the one teammate that, even when I’m gassed, I look at her and I push even harder.”

Their parents, Dan and Robin Price, have been involved in NSA lacrosse for years and have made contributions to the sport in any way possible.

Coach Connor Carson says that Marlin has made her first year of coaching at NSA easier because she knows she can count on her.

“She is one player that I know I can count on to go 110% no matter what, and that makes coaching fun,” Carson said. “The team also really responds to her. ”

Marlin will continue her lacrosse career at Sewanee: The University of the South in Sewanee, Tennessee.

“I’m so grateful for this recognition but every single person on our team is so important and I just want them all to know that,” Price said.