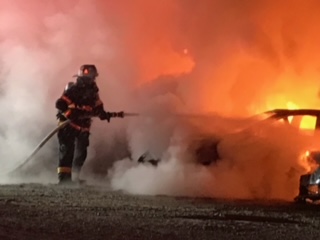 Firefighters extinguish a blaze that burned eight cars at a business on Portsmouth Boulevard.

Eight cars burned during a fire early Monday at Insurance Auto Auctions Inc. in the 1300 block of Portsmouth Boulevard.

Firefighters, who arrived on the scene at 4:36 a.m., worked quickly to extinguish the fires and apply firefighting foam to contain the fuel that was leaking from the burning vehicles. The fire was under control at 5:08 a.m. The fire did not reach the building on the site.

The fire is under investigation by the Suffolk Department of Fire & Rescue Fire Marshal’s Office.

SCA valedictorian a realist about achievement