‘We have to do it at the right time’: Council declines to extend weekend live entertainment hours to 2 a.m. 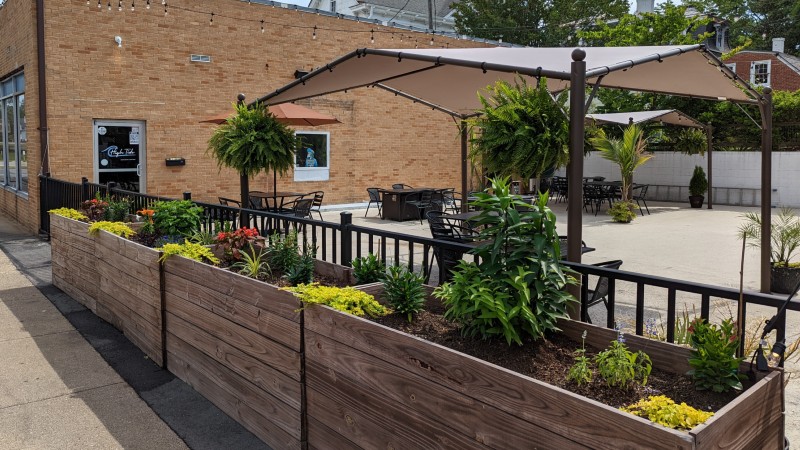 High Tide Restaurant & Raw Bar at 130 N. Commerce St. will be allowed to have live entertainment at the restaurant until 11 p.m. Sunday through Thursday and Friday and Saturday until midnight after City Council approved its conditional use permit request, 7-1 after a June 15 public hearing. It will also be allowed to offer live entertainment outside from noon until 6 p.m. on Fridays, Saturdays and Sundays. Rennee’s Restaurant and Lounge, which had sought to offer live entertainment until 2 a.m. on weeknights and 24 hours per day on weekends, were approved for a conditional use permit under the same hours, except it does not offer outdoor entertainment (File photo).

Live entertainment hours downtown won’t be extended despite pleas from restaurant owners who had been served with violation notices, but council members, including the mayor, believe it is only a matter of time before they get what they want.

The owners of two restaurants, Renneé’s Restaurant and Lounge on 156 W. Washington St. and High Tide Restaurant & Raw Bar at 130 N. Commerce St., received notices of violation March 4 for allowing live entertainment without a conditional use permit. Both would like to see downtown live entertainment hours extended until at least 2 a.m.

Mayor Mike Duman said the city is not ready for that — yet. He cited the need for proper code enforcement, better lighting, more cameras and more of a police presence in the downtown area.

“I’m all about downtown, creating a vibrant downtown,” Duman said during June 15 public hearings on the two permit requests. “I want to do 2 o’clock in the morning, believe me. I envision, eventually, 2 o’clock in the morning, closing down both ends of Washington Street, just have like a little Bourbon Street in there, whatever you want to call it, close it down at Washington Street, close it down at Saratoga (Street). But the key is we have to do it at the right time. We have to be prepared.”

He said it’s premature to extend the hours, especially if there are serious incidents in the downtown area without the proper mechanisms to handle them.

“The worst we can do is be premature in extending these hours and then there turns out to be a couple of unfortunate incidents,” Duman said. “And then what’ll happen is there will be a perception that it’s not safe to go to downtown Suffolk, and that is the last thing that we want. So I think we’re all working toward a common goal. … I think this is a step in the right direction.”

Renneé’s owners had sought a permit to allow live entertainment until 2 a.m. during the week and 24 hours per day on Saturdays and Sundays.

Why restaurants need conditional use permit

In a 7-1 vote, with Donald Goldberg voting no, it approved High Tide’s permit request, but modified the outdoor entertainment hours to go between noon and 6 p.m. The vote for Renneé’s permit request, which had the same recommended hours from the city’s planning department, was also 7-1, with Goldberg in opposition.

Duman said there needs to be more clarity on the definition of live entertainment, and a review of the parameters of how businesses are classified if they do want to offer it. He said each conditional use permit must stand on its own merit, but each restaurant owner seeking one must be treated fairly.

High Tide co-owner Karen Tew said the business had been open since August 2020 and had unknowingly allowed live entertainment — DJs and acoustic performers among them.

“We do understand that this is what the standard is in Suffolk at this time,” Tew said, “and that is what we are requesting. However, I also request that (it) … may be lengthened at another point in time.”

The city’s unified development ordinance requires businesses to obtain a conditional use permit to establish a bar and nightclub within the central business district. As defined by the city, a bar and nightclub is a restaurant or similar establishment in which there is a dance floor or live entertainment.

Restaurants and bars can stay open until midnight Sundays through Thursdays and until 2 a.m. on Fridays and Saturdays, by right, but if they offer live entertainment, it has to end at 11 p.m. on the weeknights and midnight on weekends, with noise being the primary factor in that, according to Planning and Community Development Director Kevin Wyne.

Race and fairness in enforcement

Rennee Townsend, who co-owns Renneé’s with her husband, Jeffrey Townsend, said their business was targeted because it is a Black-owned business. When their business received their notice of violation about a month after opening, she decided to report other businesses that she knew to also be violating the ordinance.

She said they operate Renneé’s as a restaurant that serves alcohol, rather than a nightclub, an important distinction, she said, because her ABC license states it has to have 55% of its sales be for food, with the other 45% alcohol. She said it had only had a DJ providing entertainment.

“I was doing anything that wasn’t already customary for downtown restaurants,” Rennee Townsend said. “All restaurants (were) having live entertainment in the downtown district. But when the city cited me, I was lost for actions because I didn’t know why. It appears the only reasons I was cited was because I was Black and I was a female.”

She said she patronized all of the other restaurants downtown before deciding to open one of their own and said she was told by the planning office the others were not in violation because they had not been reported, so she decided to report all of them.

Councilwoman Shelley Butler-Barlow said it needs to be more clear to businesses that they must have a conditional use permit to offer live entertainment.

“We need some sort of fairness in the way that we’re enforcing this,” Butler-Barlow said. “If we’re only going on complaints, that’s maybe not the best system. … To Ms. Townsend’s point, I don’t know that she’s been particularly singled out, but I do think that we’re not enforcing that evenly throughout the downtown area.”

Wyne said his office cited Renneé’s when it received a report of a violation. It cited others after they were brought to his office’s attention.

“Now the city has 10 CUPs because of me,” Rennee Townsend said.

Councilman Tim Johnson said he’s never known the council to do anything but the right thing for everyone in the city. He said Wyne is simply doing his job in enforcing the requirement for a conditional use permit for restaurants to provide live entertainment.

Fears — of lost business and safety

Rennee and Jeffrey Townsend, who also spoke during the public hearing to support High Tide’s request, said they are losing business to similar businesses in other Hampton Roads localities. Rennee Townsend said that has a trickle-down effect because if they cannot offer live entertainment at certain times, their business, employees and distributors are not making money. She said the city has a choice to make on whether it wants downtown to thrive.

One resident, Brian Saunders, said he wanted High Tide’s entertainment hours on Sundays to begin at 1 p.m., rather than 11 a.m. Saunders, who lived across the street from Renneé’s until recently, said he moved due to crime and a lack of police presence, and there is a noise problem after the restaurant closes, something he acknowledged the owners have no control over. He also said the issue of receiving a notice of violation is not a race issue.

Betsy Brothers, who spoke against the Townsends’ permit request, said she fears the lost business to other places, but wants to see security improvements such as additional lights, cameras and police.

Responding to Goldberg’s concerns about noise, Wyne said businesses still have to follow the city’s noise ordinance, which is enforced by Suffolk police.

Vice Mayor Leroy Bennett said he wants to ensure all downtown businesses are operating on a level playing field.

“Whatever we do here, I want to make sure we do the same thing for the other ones,” Bennett said following the public hearing on High Tide’s permit request.

Johnson agreed with Duman about the inevitability of extending weekend entertainment hours to 2 a.m., but he’s not ready for that.

“I think this is the right decision for right now for our growing city,” Johnson said.