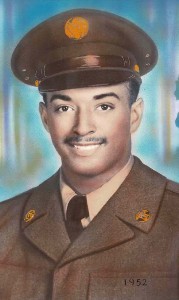 Laverne “PeeWee” Johnson was born on March 19, 1931, in Flushing Queens, New York, to the late Samuel and Caretha Johnson, raised by stepmother Gertrude Johnson. He was one of six children, siblings Everett, Martin, Sam, Betty and Geraldine.

Laverne attended elementary and junior high school in Flushing, New York, where he was also a member of Ebenezer Baptist Church.

He attended Woodrow Wilson High School in Jamacia Queens, New York, where he graduated with honors. After graduation, he was employed by the Brooklyn Navy Shipyard. In 1952, he was drafted into the United States Army. After basic training, he came home and married his high school sweetheart, Helen. To this union, four daughters were born, Barbara Ann, Cynthia, Deborah and Ellen.

Laverne was a music man, especially jazz. He could name that tune! He loved fishing and one of his hobbies was carpentry. Laverne loved traveling with his wife and family. They traveled all over the world and he toured all 50 of the United States.

Laverne was a member of the Masonic Lodge in New York City.

After 20 years as a steamfitter for the Department of Marine and Aviation, he finally retired. In 1994, he made Suffolk his forever home.

Laverne loved his sweetheart, Helen, his girls and his grandchildren — his famous words were “yes dear.”

Laverne departed this life on July 1, 2022.  He was preceded in death by his parents, Samuel and Caretha Johnson; brothers, Evertt, Martin and Sam; sisters, Betty and Geraldine and loving daughter, Barbara Ann.

Laverne, we are unable to express in words how much we love you or how much you will be missed, but God said, well done my good and faithful servant, it’s time to come home now. Amen.

A viewing will take place from 11 a.m. to 1 p.m. on Wednesday, July 13, at Canaan Baptist Church, 2064 Nansemond Parkway. Service will follow.