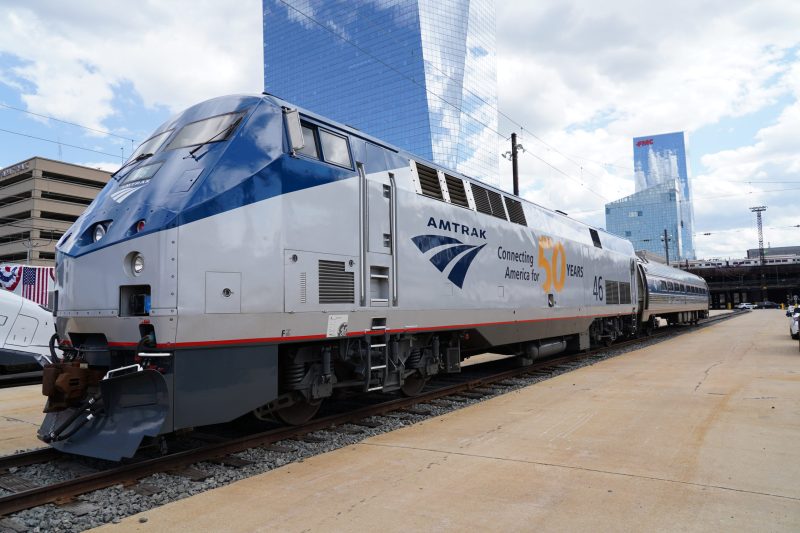 Some Suffolk residents have begun a social media campaign to call for an Amtrak stop in Suffolk. (Submitted photo)

For Suffolk native and frequent traveler Danny Epperson, watching an Amtrak train whisk through the city without stopping is frustrating.

Epperson uses Amtrak for destinations such as Richmond, Alexandria, and Washington D.C. However, the closest operating station to Suffolk is in Norfolk, adding a costly commute.

“I have to pay for gas and the toll to get to the station, only to have the train pass through Suffolk (near my house!),” Epperson lamented. With the average price of regular unleaded gas in Suffolk hovering around $4.55 per gallon — according to gasbuddy.com — cutting down on driving is a necessity for many residents.

Epperson, along with other Suffolk residents who would benefit from permanent service to and from Suffolk, have taken to Facebook to mobilize their campaign. The group called “Build an Amtrack stop in Suffolk, Virginia,” of which Epperson is administrator, has 313 members. Epperson believes a Suffolk stop would draw ridership from beyond the immediate vicinity of Suffolk, to include the remaining municipalities of the Tidewater and the border region of North Carolina.

History of Amtrak in Suffolk

According to trainweb.org, an organization that tracks historical train routes, Suffolk has not had Amtrak service since 1977. The city once was the second stop on Amtrak’s Mountaineer, a line beginning in Norfolk, and stretching to Chicago, with stops in Petersburg, Richmond, and Roanoke. Passengers wishing to travel north or east rather than continuing west towards Chicago, could transfer to other lines at the aforementioned stations.

A news release from Amtrak dated April 15, 1977, just six weeks prior to the Mountaineer’s cancellation, cites the route’s financial infeasibility. According to the article “Possible Changes in Mountaineer Route,” the line was losing money in droves.

“An average of 35 persons per day were using the train, revenue per passenger was $14.34 versus an operation cost per passenger of $54.87,” the release stated. Since June 1, 1977, the downtown Suffolk station has sat vacant.

High fuel costs and tolls are a significant consideration for those traveling between Suffolk, Norfolk and Hampton. The main thoroughfare connecting these cities is Interstate 264, which uses two tunnels — the midtown and downtown — to traverse the Elizabeth River. The toll for passenger cars and motorcycles is $5.81 during non-peak hours (midnight-5:30 a.m., 9 a.m.-2:30 p.m., and 7 p.m.-midnight) and $6.37 during all other hours, according to the tunnels’ website driveert.com.

Not only is paying upwards of $12 in roundtrip tolls costly, but these tunnels also act as traffic chokepoints during peak travel times. A dedicated rail line would alleviate such congestion. Such savings in both time and money will incentivize travelers to use this method to commute. Epperson stated “I’d even take the train to go to Norfolk from Suffolk to shop!”

Additionally, a stop in Suffolk would connect riders to other destinations along the eastern seaboard, such as Philadelphia, Pennsylvania, New York City and Boston, Massachusetts. Useful for business travelers and tourists alike, train travel has the added benefit of transporting passengers directly to the city center, where their final destination is easily reachable via public transit or even walking.

Suffolk city councilor and transportation committee member Donald Goldberg has fond recollections of travelling on Amtrak’s Mountaineer, and sees no reason why service shouldn’t return. However, he believes some minor logistical issues need to be addressed to make such a desire become reality. Chiefly, this would entail building or renovating a station to accommodate passengers, and coordinating with the schedule of other rail traffic to streamline Amtrak’s movement through Suffolk.

Despite the perceived feasibility of a stop in Suffolk, the necessary reforms are outside of the city’s budget. According to Goldberg, a major obstacle to Amtrak’s return is a lack of state and federal funding. “The Tidewater region and Suffolk are often passed over for infrastructure funding in favor of Northern Virginia” he stated, referring to the efficient train connections in municipalities such as Fredericksburg and suburban Washington D.C.

The movement to bring Amtrak service back to Suffolk is a robust one, with the support of both citizens and local politicians. As it gains more supporters, the campaign should attract the attention of more influential policymakers, who can effect the change necessary to provide funding for this beneficial project.