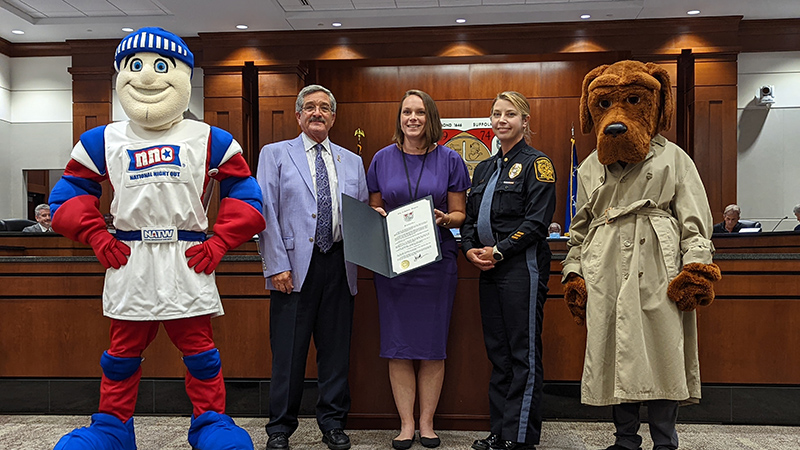 Mayor Mike Duman issued a proclamation in honor of the Aug. 2 National Night Out event in the city, which formally extended an invitation during the City Council’s Wednesday meeting for the event. From left: Nat Night, Mayor Mike Duman, Interim Director of Media and Communications Jennifer Moore, Suffolk Police Maj. Casandra Garvin and McGruff the Crime Dog.

Two items on City Council’s agenda Wednesday that had drawn interest among residents —- a rezoning request to allow for 131 single-family homes to be built on 45.2 acres near Shoulder’s Hill Road and Bennett’s Creek and a conditional use permit request to allow New Realm Brewery to add live entertainment  — were both deferred, but they came under different circumstances.

In addition, council heard from Shentel officials about its plans to offer broadband to city residents. The city also received federal and state money for its bus service, Suffolk Transit, reduced the youth recreation center membership by half and authorized the issuing bonds for capital and stormwater projects in the city.

Council approved an ordinance to begin acquiring property for the Pitchkettle Road realignment project. It also approved conditional use permits for Suffolk Christian Academy to use First Baptist Church on Main Street for its upper school students and to allow live entertainment at Wall St. Cafe’s West Washington Street location.

Councilman Roger Fawcett participated in the meeting remotely due to illness, but did not stay for the entire council session.

At the start of council’s regular meeting, City Manager Al Moor announced that the applicant for the rezoning of 65 acres off of Bob White Lane near the Quaker Neck subdivision from rural residential to residential low medium density zoning had sent a letter to the city asked council to defer action for 60 days until the Sept. 21 meeting. The homes would be built on 45.2 acres of the property.

The letter, according to Moor, also said the applicant for the project, Bob White Development LLC, could modify the proposed density. He said if the applicant requests a new rezoning classification, it would require the applicant to submit a new application to the city “and require a new process to evaluate the request.”

The Planning Commission voted 4-3 at its June 21 meeting to recommend approval of the rezoning.

The first vote to approve a conditional use permit to allow the live entertainment failed on a 4-4 vote. A second vote to defer the permit request for 30 days passed 7-1.

Residents opposed to the live entertainment cite the noise that would come from it, saying  the buffer between the brewery and the adjacent neighborhood is not sufficient. Supporters said the Harbour View area needs more businesses like New Realm’s.

Bonds for capital and stormwater projects

The city expects to use more than 10% of the total bond proceeds to finance all or part of the cost of the new downtown library, major school repairs and systems replacements, school administration building renovations and the replacement of John F. Kennedy Middle School.

Shentel officials outlined its plans to install broadband in the city during council’s work session Wednesday. Council, by a 7-0 vote, gave its approval for a conditional use permit allowing the company to locate its utility facility in a small part of the city’s Health and Human Services building at 135 Hall Ave.

Company officials told council its broadband service in the city would serve more than 28,000 homes.

By a unanimous vote, council authorized the city to begin acquiring property through permanent or temporary easements for the Pitchkettle Road realignment project.

Director of Public Works Robert Lewis said the nearly $10 million project will run from the existing bridge over Lake Meade to the existing intersection of Pitchkettle Road, Prentis Street and Constance Road.

Right of way acquisition will begin this month and continue until November 2024, when construction, which will take about two years, is expected to begin. The project is expected to increase capacity at the intersection with Constance Road and Prentis Street and reduce congestion at the railroad crossing.

SCA can use First Baptist for upper school

The Federal Transit Administration has awarded the city $1.075 million in federal funding for the city’s public transit service, Suffolk Transit, for the current fiscal year, which began July 1. The money will be used for operational expenses.

Council needed to vote to adopt an ordinance for the appropriation — and did so unanimously — as it was $203,106 more than what was estimated in the current budget. The item was part of its consent agenda, in which items on it are voted on as a group.

The Virginia Department of Rail and Public Transportation also awarded the city’s public transit service $433,543 in state money for the fiscal 2023 transit system fund budget for program services. The amount is $160,189 more than was included in the current budget. Council also voted on this as part of its consent agenda.

As part of its consent agenda, council unanimously voted to cut the recreation center membership fee for youths ages 7 to 17 from $10 to $5 for the current fiscal year.

Council unanimously approved its plan for precinct boundaries in boroughs and polling places. The redistricting map showing the current boundaries will be on file in the office of the city clerk.