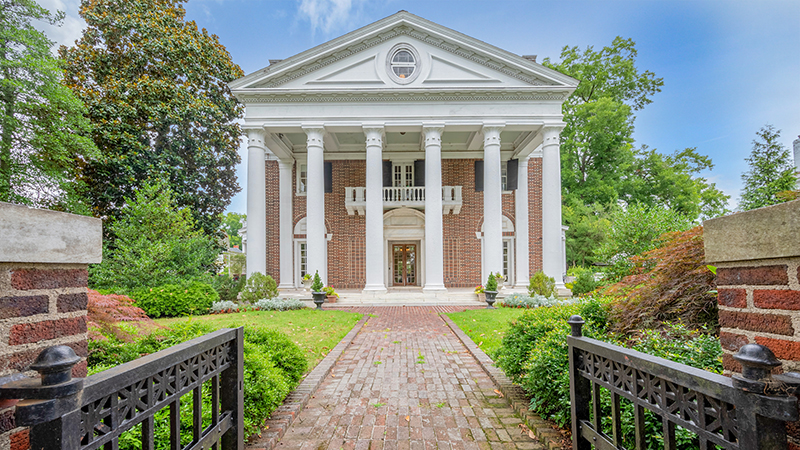 Truitt House, built in 1909 by lumber magnate George Truitt, looks to have only its fifth owner in its rich history as it goes to auction next week. The mansion, on both the state and federal historic registers, is located at 204 Bank St. in downtown. (photo submitted by Elite Auctions)

A part of Suffolk’s history, the Truitt House at 204 Bank St., heads to auction Friday, Aug. 19, as current owner Ruth Baker prepares to retire so she can spend more time with her children and grandchildren in Florida.

In 2012, Baker became only the fourth owner of the home built by lumber magnate George Truitt in 1909.

“The house just called to me,” Baker said in a Monday interview. While it came with its challenges, she said she has enjoyed restoring the home while building a thriving business as both a bed and breakfast and venue for events.

“It’s been so much fun,” she said. “ I worked very hard to be very true to the architect and the original builder.”

Listing agent Alex Perecko, with RE/MAX Alliance in Virginia Beach, praised the work that Baker has done at Truitt House. She called the restoration “museum quality” and explained that all of the work and materials used have been the finest quality and true to the home’s history.

The 8,500-square-foot mansion sits in the heart of downtown, featuring a total of seven bedrooms and eight bathrooms, Perecko said.  In the late 1980s, Truitt House was registered as a historic site on the Virginia Landmarks Register and the National Register of Historic Places.

Some of the more notable features of the home include its nine fireplaces, four of which are marble, a large ballroom on the third floor that was converted into a massive owner’s suite, an octagonal study, crystal chandeliers, an upstairs musician’s mezzanine, and a butler’s pantry that boasts 200-plus-year-old cypress countertops.

The mansion’s over-built, bank-like construction was a rarity among private residences of the time, making it unique among others in Suffolk’s Historic District. The home features steel beams in the basement and elsewhere, along with walls of brick, four bricks thick.

Perecko said the wood in the home’s study is pearly oak, which is now extinct, and stands out as one of the many features Truitt was able to include when he built it because of his ties to the lumber industry.

“It’s a gem,” she said, noting that Baker has used the finest finishes such as Italian marble in her renovations.

The home can easily be converted back into a residence, if the new owner chooses to do so, Baker said. The original door hardware remains as it was when Truitt lived there, meaning guests’ doors do not have locks.

Both Perecko and Baker said photos just don’t do the home justice. One must see it in person to truly appreciate the quality and spectacular beauty of the house, they both agreed in the Monday interview.

“The home truly and really has a spirit about it,” Baker said.

For Baker, the many friendships she developed and special moments she has shared with so many people are among the highlights of her 10 years owning and operating Truitt House. For example, she recalled a woman’s 95th birthday celebration held there that brought all of her family together in the historic house. She said there have been many other 50th and 60th anniversary celebrations and special occasions that it is difficult to pick one as her favorite highlight.

“I just like to have had the opportunity to enhance those moments for people,” she said.

Perecko said there has been a lot of interest in Truitt House, both from folks looking to continue operating it as a bed and breakfast and many others interested in making it their residence.

Baker’s path to Suffolk started in Florida, taking her through Bay Harbor, Maine, and then back to her native Virginia.

After her husband passed away, Baker said she planned on moving to Maine, where the couple had planned on moving. She attended culinary school there, which was always one of her plans, because she loves entertaining.

She said that she and her husband hosted many corporate events and other large functions at their Florida home. “I always enjoyed it,” she said.

After finding that Maine was too far away from her children, she eyed moving back to the Lynchburg area. However, everytime she searched for a location the Truitt House kept showing up and calling out to her.

She found an excellent architect in Seth Ballard, who provided her with many reasons not to undertake the project. But Ballard was impressed when he finally did see the home and Baker said she made up her mind to buy it just minutes before the auction started.

“I have loved my time in Suffolk and made many wonderful friends,” she said. “And I have been richly blessed to have had the honor of  hosting so many wonderful guests in the Truitt House over the past years.”

Perecko said the next owner may want to take on another chance to advance the property’s use as a venue. The carriage house, still with many of the original features including its dirt floor, holds the potential to become a brewery or a restaurant, she noted.

Truitt House is available for the public viewing from 1-4 p.m., Saturday and Sunday, Aug. 13-14, and private tours by appointment with Perecko.

The majority of the home’s contents are also being sold with it, she noted. The auction also does not have a reserve, which Perecko said is quite unusual, noting that it will go to whoever is the highest bidder.

The auction is being held in conjunction with Elite Auctions, based in Naples, Florida.

“This incredible home is known to the people of Suffolk and to people that come to stay here at the bed-and-breakfast from far and wide as a very special place,” Elite Auctions founder and Chief Executive Officer Randy Haddaway said. “It was built for a special person, one of the town’s first millionaires, in fact, and it was built to withstand just about anything life could throw at it.”

Tara McLean, Elite’s president and project manager for the upcoming auction, said the massive estate was clearly built to make and to leave a lasting impression on everyone who sees it. “And the home still does that today, and it will continue to do so long into the future,” she said.

“The Truitt House deserves the place of prominence it has occupied for more than a century, both geographically speaking, as well as in the hearts and minds of the people of Suffolk,” McLean said.

The 2012 story published in the News-Herald in advance of Baker purchasing the property states the classical-revival home was at the center of the social and political scene in Suffolk for decades, hosting holiday parties for high society and fundraisers for politicians.

“It’s the finest home in Suffolk,” Sue Woodward of the Suffolk Nansemond Historical Society told the newspaper back in 2012.

Pececko said that Baker is open to offers in advance of the auction if someone decides they want the home and want to purchase it. A news release from Elite Auctions said the residence was recently listed at $1.2 million according to publicly-accessible real estate data sources.

McLean said anyone who plans to bid in person needs to fill out the auction Terms and conditions and bring a cashier’s check for $25,000, made payable to Alperin Law PLLC, on auction day for the bidder deposit if you win or wire in the $25,000 deposit by Thursday, Aug. 18, which can be done by phone.

The auction begins on site at Truitt House at 11 a.m. Friday, Aug. 19. The information on the sale can be found online here.

Interested buyers can also contact Perecko at RE/MAX Alliance by calling 757-575-6600 or emailing her at alex@alexperecko.com. To pre-register to bid, or to schedule a tour, call 844-94-ELITE or email bid@eliteauctions.com.