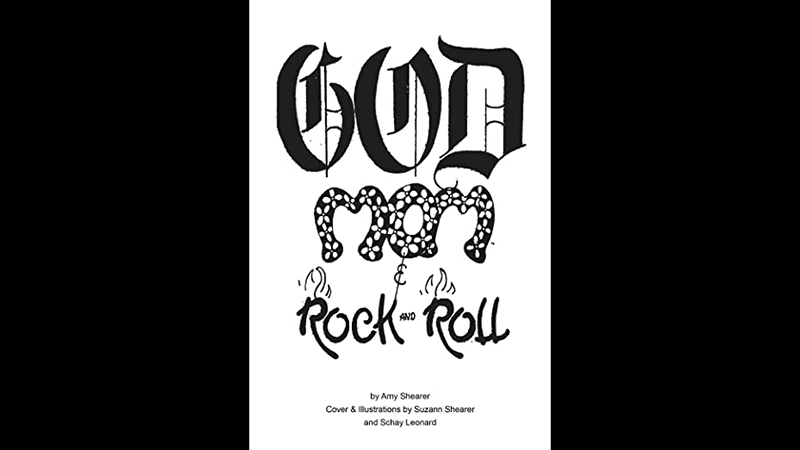 Amy Shearer is celebrating the re-release of her book about her journey with God. Originally released in December 2002, “GOD, Mom & Rock and Roll” is Shearer’s personal story of how God helped her throughout the challenges and roadblocks of her life. In a recent interview, she talks about the meaning behind the title, why she wrote the book and her hopes for everyone who reads it.

Shearer, both a mother and grandmother, lived in Suffolk from January to June of this year. Currently, she resides in Ashland as a manager for Goodwill, but she plans to move back to the city in the near future to be closer to her son, daughter-in-law and grandchildren.

The title of Shearer’s book ties to her upbringing, she explained.

“I am a ‘60s baby so I grew up in the ‘70s listening to ‘70s rock and roll. So our motto is ‘Sex, Drugs, and Rock and Roll.’ So, forget the sex and the drugs, right? What I loved was the music. If you are from that particular time, you would see all of the songs, titles, albums in the book… We’ve all tried sex, drugs, and rock and roll. Why not try God?”

She said this is really what the book is about. “If you don’t know anything about God, this would be, especially if you’re a non-believer, that is the whole point in the book,” Shearer said.

Despite being released back in 2002, the issues in Shearer’s book still ring true today. She spoke about how the words she wrote still remain relevant to the issues of today’s society.

“The book is a premonition… 20 years ago when I wrote those words, gun control was big, mental health-nobody wasn’t talking about mental health, race — I was in a interracial relationship back in the ‘90s when it wasn’t cool. I talked about voting, standing up for what you believe in… The world, we need to be nicer to each other, all of us are different, unique, special. God created every single person. He loves every single person. Every person matters to him.”

Shearer spoke about what people can expect when they read the book. She also focused on how it was written for a universal audience so that everyone could pick up and read it.

“If you notice when you first open the book, large-font size. Because it’s supposed to be a very easy quick read,” she said. “Nobody has a week to read a book. So I wanted it for the younger people who are like my grandson, who’s turning seven at the end of the month. But it’s also for older people like me that have a hard time reading the small font. So, I wanted it for everybody.”

Likewise, Shearer talks about how she uses her life and her challenges in the book to show God’s work and to show others that they aren’t alone in their struggles.

“I put in there personal stories about my life and situations to drive the point home. I use myself and all these situations, which I get myself in and honestly, I try not to but it just happens. When I had nobody, God was there for me. And even now, It’s been 21 years since I finished writing the book… In fact, people say ‘are you going to write a continuation from 2001 to now?’ And I was like, ‘Oh Lord, there are so many situations I could tell you in these last 20 years where God has been there for me… And He will be there for you, because I am just like you. I am not rich, I don’t make six figures. I am a single person.”

One of these personal stories is Shearer’s divorce, the heartbreak that came afterwards, and the challenge of being a single parent.

“The biggest one was when I got divorced. When I realized that my marriage was over and I was crushed because we did not make it,” she said. “I was crying. I was mortified. My son was going to have to share his parents.”

Shearer said this was devastating, because she had made this promise to God that I couldn’t keep. “And the reason I couldn’t was because the ex-husband didn’t keep his promise and that happened so many times where somebody says ‘I promise’ and then the promise is broken… I was crying to God, ‘Please, please help me.’”

Then came the challenges of learning to navigate being a single parent.

“It’s a huge adjustment when you think the dad is going to be there for their kids and they’re not,” Shearer said. “And you, as the mom, have to be both mom and dad, and the breadwinner, and everything.”

She said that one out of every two marriages in the country now end in divorce, meaning there are a lot of people that have been in this same situation.

Shearer also wants people to understand that though she uses personal journey in the book, the overall focus is about God rather than her.

“I want you to see God in the book and unfortunately, a lot of people say ‘Oh, this is just about your life.’ Well, no it’s not and I’m very sorry, but you didn’t get the purpose of the book… You should see God. That’s why his name is big, in all capital letters because he is the person. I am just his humble servant. That’s who I am.”

“God loves everybody,” she said. “He loves us all equally. That’s the biggest thing is to try God, trust God, see what he can do. Because He can do so much more than we can do as humans. I love rock and roll, but God is my rock.”