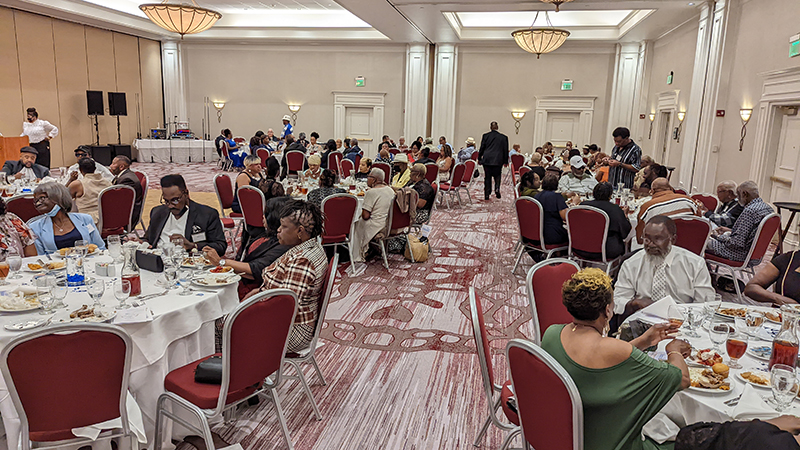 Past and present members of the South Suffolk, Pleasant Hill and Orlando communities gathered this past weekend for a first-ever reunion. They held a banquet last Saturday at the Hilton Garden Inn-Suffolk Riverfront.

They were living proof that something good could, and did, come out of the South Suffolk, Pleasant Hill and Orlando neighborhoods.

The pride among those who have lived, and continue to live, in their neighborhoods, was evident over the course of the weekend as they held their first-ever reunion.

At a banquet to celebrate the reunion Saturday at the Hilton Garden Inn-Suffolk Riverfront, they shared their memories, their stories, hugs and danced away the evening in fellowship. They held a meet and greet last Friday, and held a worship service at St. Paul Church followed by a cookout Sunday.

At the banquet, the Rev. Betty Montgomery noted that the Orlando community began at Malone Avenue and ended at Osceola Avenue, and in between, were four other streets. She said the people in her community were unique.

“You had industrial on the left slide of the street and residents on the right side of the street, and in between, you had little boys and girls thinking that they were in a pleasant place, if you will,” Montgomery said. “Did we struggle? Well, I guess we did, but our parents didn’t let us say that we were struggling.”

“Orlando was what we call a blue-collar community. My dad worked at Planters. There were some who worked at the shipyard. Some worked at Ramsey’s Mill. And yet, they were able to take care of us. We were able to play together, go to church together, for there was a church in every community, as we have called those places out — South Suffolk, Pleasant Hill, Orlando.”

Frank Kahan said growing up in Pleasant Hill, he and those he hung out with called themselves the little rascals. He said they did strange things fed to them by their elders at the barber shop.

“We didn’t have video games and cell phones,” Richardson said. “And so we was out in the street playing. We did things that the kids of today don’t do. We didn’t walk around with sagging pants. We were respectful of our elders. We always said, ‘Yes, ma’am’ or “No, sir.’ If you was caught on Charlotte Avenue in front of Mr. Benton’s house doing some things you shouldn’t have been doing, Mr. Benton would call around the corner and tell my parents what I was doing, and so South Suffolk was a good community where we got most of our roots, and from that, we were able to do things in life that we probably thought we would never, ever do.”

They were not disappointed by what they didn’t have, Richardson said, but rather, treasured what they did possess — family, friendship and a sense of community. He recalled knowing when to come home by the streetlights coming on. He said they learned good morals, found out who they were and had a good upbringing with a solid foundation.

Cynthia Dowling, the committee co-chairperson, said God-willing, they will hold another reunion. Throughout the night, they gathered together, posing for photos and reminiscing.

“I know it started with a thought,” Richardson said. “Let’s have a reunion. And see what it is now. We all came together. We hadn’t come together for 30 or 40 years. We’ve been all over the world and we are back in Suffolk, and it’s a marvelous thing. God is good.”