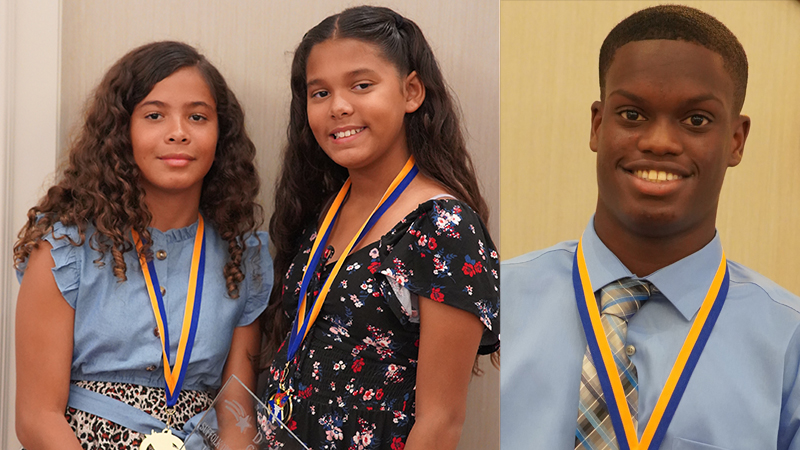 Among the 21 Suffolk youth receiving “I See a Future Leader in You” medallions at the Suffolk Democratic Committee Leadership Luncheon on July 30 were, in photo at left, fifth grade twins Madison and Morgan Ward and, at right, King’s Fork High School senior Nicholas Hamilton.

After waiting two years because of the pandemic, the Suffolk Democratic Committee was excited to hold its annual Leadership Luncheon at the Hilton Garden Inn Suffolk Riverfront on Saturday, July 30.

This year a special addition to the program was the presentation of “I See a Future Leader in You” medallions to 21 youth in the Suffolk community. The medallions were placed around their necks by local elected officials and U.S. Rep. Bobby Scott, D-Va.

“Clearly one of the highlights of the afternoon, parents and family members of the honorees cheered and cried with joy,” Jenkins said. “Several of the honorees were filled with emotion because they realized that someone was saying, ‘I believe in you; you can do it.’ It is not about reminding them of any mistakes they may have made, but it is about what they are going to accomplish as they move forward in life.”

Jenkins told the audience that being an honor student or a student without discipline issues were not requirements for nomination for the awards. She stated that “we all have made low grades one time or another and we’ve all made some harmful choices in life. However, there were persons who didn’t hold us hostage because of it, but encouraged us to do better and that we have greatness on the inside. Those persons were willing to guide us in the right direction which creates leaders because that is what great leaders do.”

The keynote speaker, Pastor Karl Wilkins from The Mount Suffolk, delivered an inspirational message described as relevant for the occasion.

“It was what everyone needed to hear from the youth to the adults who attended the event,” Jenkins said. “Pastor Karl was transparent about his life’s journey, which is why people love him and his ministry.”

Scott shared why voting is so important and that failure to vote is not an option. He stated that all need to have their voices heard at the polls by casting their votes.

Jenkins thanked all who supported the annual Leadership Luncheon and the Suffolk Democratic Committee.