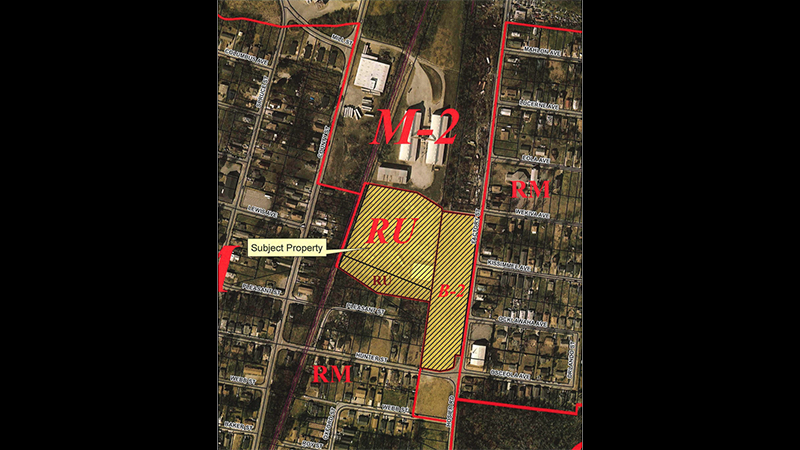 This graphic depicts the current zoning of property on Factory Street that Orlando-native Ephraim Goodman wants to turn into 20 single-family homes and 17,000-square-feet of retail space, to include a convenience store and gas station.

Ephraim Goodman has run into a roadblock in his effort to build 20 single-family homes in the Orlando neighborhood he grew up in, but if he gets City Council approval next month, he’ll be able to proceed.

Goodman received council approval two years ago for rezoning of three properties totaling 7.88 acres on Factory Street — two of them, at 4.66 acres, from heavy industrial to residential urban, and the other property, closest to Factory Street itself, from heavy industrial to general commercial zoning. The properties are about two-thirds of a mile south of downtown and four blocks south of the Birdsong Peanut Factory.

The conceptual layout for the overall development, which will be about two-thirds of a mile south of the core downtown area, includes the homes as well as 17,000 square feet of retail space and a convenience store with gas sales.

The maximum cul-de-sac length for residential urban zoning is 300 feet, and Goodman has proposed two cul-de-sacs that are roughly 600 feet in length.

Goodman submitted a layout for 20 single-family homes — the proffer on the approved rezoning allows him to build up to 23 homes — with a connectivity ratio of 1.0, less than the required minimum of 1.4 for subdivisions. The connectivity ratio, according to a staff analysis of the proposed variances, is “to support an interconnected street system to protect the public health, safety and welfare.” That ratio is determined by dividing the number of non-dead-end road links that have two intersection points by the number of nodes, meaning intersection points or dead ends.

In a July 27 letter submitted with his request, Goodman said he needs the variance for the cul-de-sac because the property “is encumbered by a 100-foot buffer along the western property line that requires all residential buildings to be 100 feet or more from any railroad right-of-way.”

He said adjoining properties to the north and south of the property limit the proposed street configuration, and that they “are not feasible” because those properties are already developed.

No changes to the actual zoning of the properties will take place.

“The developer has worked closely with city staff to ensure the proposed development best meets the intention of the unified development ordinance and allows for the development of 20 single-family homes as approved previously by (the) Planning Commission and City Council,” Goodman said.

Council will take up Goodman’s request for variances at its Sept. 21 meeting.