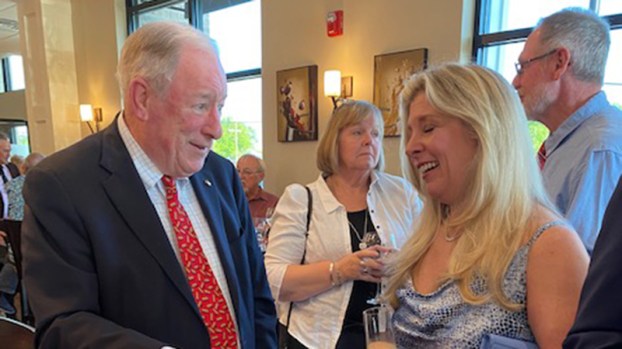 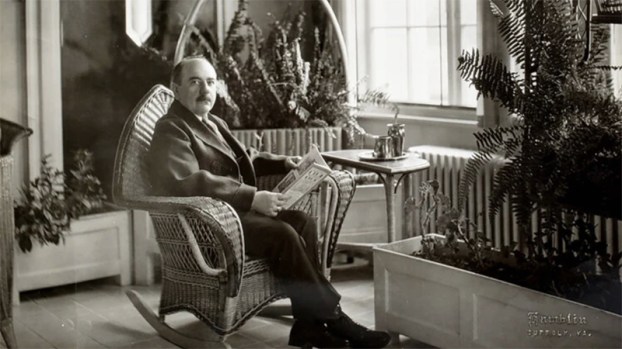 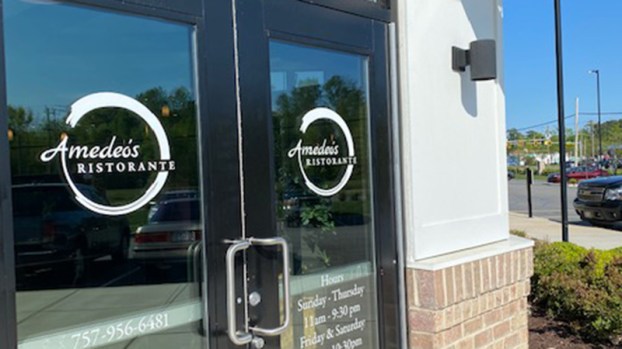 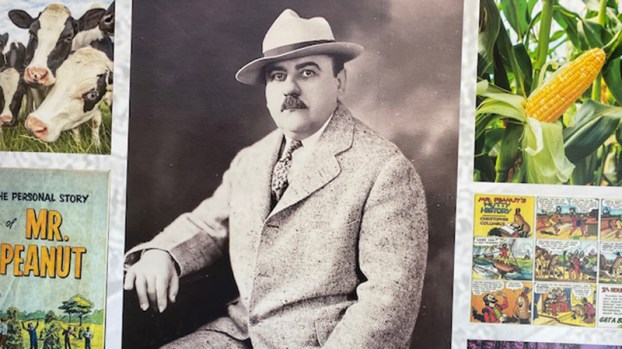 If the name Obici seems familiar you may have noticed it on Sentara Obici Hospital, the historic Obici House at Sleepy Hole Golf Course, the Obici Healthcare Foundation, the Meridian Obici apartment complex in downtown Suffolk, Obici Industrial Blvd, the Obici-Oderzo Fountain, or even a glass of cold Birra Del Obici at the Nansemond Brewing Station.

But too often, Amedeo Obici, the man whose name they all share. fades into history. A year ago, restauranteurs and Suffolk residents, Brian and Teresa Mullins, aimed to correct that loss when they named their newest North Suffolk ventures Amedeo’s Italian Ristorante and Amedeo’s Bakery.

In April, the entrepreneurial couple celebrated the restaurant and bakery’s first anniversary with a toast to Amedeo Obici – a dinner party for three dozen locals who share fond memories of the man.

The dinner guests remember the story of the pre-teen boy who left Oderzo, Italy, in 1889 to travel alone to the United States. The young Amedeo Obici arrived in New York with a Scranton, PA, address tag pinned to his jacket and speaking no English. His uncle had encouraged Obici’s widowed mother to send the boy to him in Scranton and ease her struggles to support Amedeo and his three younger siblings in Oderzo.

They also remember that same plucky boy grew into the celebrated peanut king who shared his hard-earned fortune with Suffolk, Oderzo and countless individuals. Amedeo Obici’s legacy lives in the recognition he brought to Suffolk, his continuing benevolence and a life story that reads like a novel.

It was that legacy that the Mullinses hoped to bring to light. Vintage photos of Obici’s life, a gift from his few remaining relatives, line the walls of the restaurant’s banquet room. A colorful painting, distinctive among the black and white photos, is a reproduction of one of Obici’s favorites that hung in his mansion on the Nansemond River in Suffolk.

The dinner menu read like it might in an Oderzo café – or the dining room of the Obici home in Sleepy Hole. Starting with a garden salad and the traditional Italian appetizer Filetto Carpaccio – finely shaved tenderloin dressed with Dijon aioli, grano Padano cheese, sundried tomato and arugula – the dinner guests enjoyed veal chop, basil pesto pappardelle and chicken saltimbocca topped off with Amedeo’s tiramisu and a nod to local cuisine – Lilly Farms strawberry shortcake.

It was a meal fit for the occasion, a gathering of peanut royalty as Tom Powell, president of The Addison Group and the evening’s emcee, addressed the guests. George Birdsong of Birdsong Peanuts, the century old peanut processor that takes peanuts from the fields to the end manufacturers of peanut products, was among the guests. He credits Obici, when the Birdsong shelling plant in Courtland burned in 1939, with enabling the Birdsongs to move their business from Courtland to Suffolk to work in concert with Obici’s own Planters Peanuts.

Two other guests, Doug and Mary Jane Naismith, have been actively involved in Suffolk’s Sister Cities International since it launched 40 years ago. The non-profit program seeks to promote understanding and unite people around the world. Suffolk has enjoyed a sister cities relationship with Oderzo, Italy, Obici’s birthplace, as well as Suffolk County, England, since 1995, according to Mary Jane Naismith.

Doug Naismith, retired head of school at Nansemond-Suffolk Academy, remembers that the residents of Oderzo were as enthused as the Suffolk Sister Cities group to formalize their connection. When the Italians arrived in Suffolk for the first exchange visit, they were eager to visit Obici’s home, business and anything else connected with him.

Naismith explained that while many early 1900s immigrants from Italy struggled over long years to make a decent living, Amedeo Obici “hit a home run,” he said. “Because of that he was a hero and a man to be celebrated in Oderzo.”

Obici’s popularity there grew even greater when he donated a new wing on the Oderzo hospital. On the return exchange visit, the Naismiths were in Oderzo when a Mr. Peanut statue, a gift from the Suffolk Sister Cities, settled into place in front of the Oderzo vocational school named for Amedeo Obici.

Two more of the dinner guests, Elizabeth Dalzell and Ken Kramer, traveled from Haddonfield, New Jersey. Dalzell is Obici’s great-great-niece, a relationship that inspired the couple to spend years researching the Obici family history. The photos in the restaurant came from their collection and include several not seen before in the Suffolk area.

Meeting so many people who appreciated her Uncle Amedeo was a pleasure, Dalzell said, adding “it means a lot to see my family in all the photos lining the walls here.”
Because Obici was such an animal lover, from goats and rabbits to bears, the Mullinses, also animal lovers, decided to initiate a fundraiser in his name. Sales of a specially created cocktail, The Greyhound, generated funds designated for the James River Greyhounds, a rescue group that each year places 75 retired racing Greyhounds in new homes as family pets.

Sue and Jim Maloney, from Dawn, Virginia, and representing the James River Greyhounds, were on hand to receive the contribution. Their adopted Greyhound, Tabi (short for her racing name of Tabloid Tabi) convinced the couple that the retired racers can be great pets as well.

The Mullinses were happy to see so many people there to celebrate Amedeo Obici and enjoy dining in their newest restaurant. The couple, as M & M Hospitality Group, also own the Vintage Tavern, River Stone Chop House and Decoy’s Seafood and plan to open a new restaurant, Cork & Bull, in Chesapeake’s new Summit Pointe development in the fall.

The Mullinses are also real estate developers and know the Suffolk area well.
“Brian and I have been here for a while,” Teresa Mullins said. “We know the history of how Amedeo Obici and Planters brought recognition to Suffolk.”

If you would like to know more about Amedeo Obici, watch for a new book about his incredible life and business acumen. The Birdsong Charitable Foundation and the Obici Healthcare Foundation are co-sponsoring the book scheduled for release in 2023.